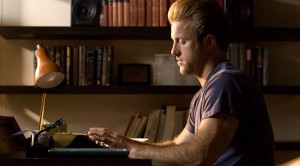 You’d hope a movie called “Mercy” about a novelist that opens with the no-longer-young, chain-smoking, drawn-to-drink writer named Johnny (Scott Caan) typing “MERCY” onto a sheet of paper and pulling it from the platen would have a modicum of self-consciousness. Which the modest, not quite timid “Mercy” has, in not necessarily the best way. Caan is a short, beefy, bull-shouldered man, who could be an uncommon force on screen in the right role, and his eyes have some of the dance moves of his father’s when he bruises through the dialogue of his own script. What could shake this writer from his well-remunerated platitudes? A Brit magazine critic (Wendy Glenn) who inspires him to make with the verbals and who conveniently is named… Mercy (joining “Summer” and “Autumn” as character names taken for the foreseeable future). Photographer-turned-director Patrick Hoelck appoints the sets with no small amount of chintz, but moves through the many implausiblities—this writer of romantic fiction is scarily rich and the dialogue runs to “You write about love, but you don’t know how to spell it”—getting to the meat of the movie, exchanges between Caan and his father, James Caan, that simmer rather than explode. Mercy says Johnny is “shallow”: Didn’t she read the script? With Troy Garity, Erika Christensen, Alexie Gilmore, John Boyd, Dylan McDermott. 87m. Widescreen. (Ray Pride)