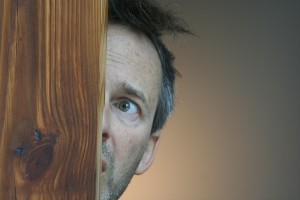 “Lovers of Hate” is the name of a novel that will likely never be written as well as a squirm’s turn of a title that perfectly suits one of the three protagonists in Austin writer-director-editor Bryan Poyser’s third feature, an exquisitely calibrated black comedy of sibling rivalry which debuted at Sundance and South by Southwest 2010.

There’s a little bit of both those festivals in the movie, from character types to physical locations. Two grown brothers are separated by geography and by success. Rudy (Chris Doubek) is the older, first seen at an Austin car wash at bleak early morn stripping off in an impromptu shower. He’s living in his car after breaking up with his wife Diana (Heather Kafka), who wants nothing more to do with him. Younger brother Paul (Alex Karpovsky), a successful writer of young-adult books who lives in a “small” New York apartment, arrives, wrenching Rudy’s self-pity party. Paul’s best-selling success with his Harry Potter-like hero comes from stories Rudy told him when they were children, and he dedicates the series to “the original Invisible Kid.” But Rudy’s not invisible, not yet; he’s like a sad terror that’s risen out of the grubby, grassy Texas in the brusque, taut cinematography by David Lowery (“Audrey the Trainwreck,” director, “St. Nick”) on a low-end Panasonic HVX camera. Diana briefly goes along with the charade they’re still a couple, but the putative author of “Lovers of Hate” will fuck it up again and again.

Consider Rupert Pupkin is your brother. Rupert Pupkin is your husband. The angry yet oblivious big bro has turned “hobo,” as Paul puts it. But comic-and-horror complications ensue: Paul has the run of a huge ski mansion in Utah. Through Austin Film Society connections, the bulk of “Lovers of Hate” was shot in a four-story, six-bedroom house on a ski slope in Deer Valley, outside Park City, where the Sundance Film Festival takes place. Paul runs away with his brother’s wife, unaware the brother he calls “a perpetual resentment machine” has already driven off to take up residence in the recesses of the huge space. Shades of the Overlook Hotel and the Nakatomi Towers: what family ghost is nibbling at the shadows? And, who’s lower than a snake’s belly? It’s a fair contest all around. From black to bleak and back again, the characters, lovingly played, especially by the quietly reactive Karpovsky, cannot but make messes. Laughs and gasps compete.

Poyser has written that he lets “all the characters exhibit aspects of myself that I am not fond of, and so the film definitely has a cathartic, therapeutic quality to it. But, the hope was always to make it not just some therapeutic exercise for me, but rather to make a film where people can recognize themselves in the characters.” His knack? The two brothers and Diana are all crumb-bums in their own way, obnoxious, human, impressively drawn. “Paul is a total asshole, for one person Rudy is a total fuck-up, for another person, Diana is irredeemable and they can’t ever accept what she’s done.”

Movies about writers who aren’t French are usually, at best, semi-tolerable. Another film opening this week, “Mercy,” settles for caricature: a sincerely meant if wooden cartoon of a schmuck with an Underwood. Poyser, whose 2004 “Dear Pillow” is a memorable take on the alliance of porn and sexuality, writes characters who aren’t just foraging for twigs and similes: their terrible behavior speaks not just to the distance between siblings but the sharp, sharp point of the pen that has not yet been put to paper. Plus, little details echo: Rudy’s lower status is signaled by his annoying cell phone, a chipped and bitten little silver Samsung item from 2005 or so.

Other key contributors include Kevin Bewersdorf (“LOL”), whose score embraces the story’s mood with scary accuracy; co-producer Adam Donaghey (“Audrey the Trainwreck,” “St. Nick”) and co-executive producer Athina Rachel Tsangari, associate producer of the world-class feat of mortification, the recently released Greek “Dogtooth.” The sort-of-biggest names attached may be Jay Duplass and Mark Duplass, directors of the summer’s most obnoxiously “viral”-marketed studio release “Cyrus.” Where the tone of “Cyrus” alternates between the malicious and the sentimental, “Lovers of Hate” moves boisterously from comedy to embarrassment, to memorable result. “Dear Pillow” showed promise; this is a filmmaker’s arrival.

“Lovers Of Hate” opens Friday at Siskel. A trailer is below.