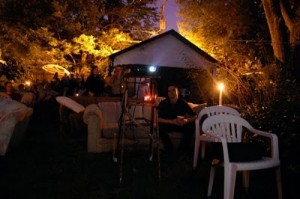 For those looking for something to reconcile a love of underground film and architectural history, Saturday’s Backyard Film & Music Festival has a solution. Now in its third year, the expanding festival has moved camp south to the Pullman State Historic Site, at the heart of the landmark company town famous for railroad car manufacturing and the 1894 Pullman Strike.  The shorts cover a wide range of approaches to filmmaking (documentary, feature, music video, animation, experimental) as well as production values. “BFMF started as a way to showcase work by people maybe just starting out, who maybe haven’t seen their work projected on a screen,” says festival spokesman Fred Koschmann. “But that’s not an absolute… there’s some very professional work as well.” This year’s festival will also be the first to feature live music, with acts like Dosh, Light Pollution and Nathan Blake Lynn performing. (Todd Hieggelke)