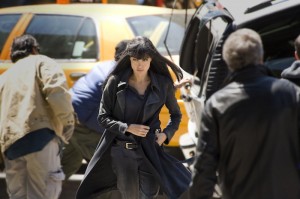 “The Salt Identity”? Many alternate titles would suit “Salt,” but it’s simplest to say that Bourne and Bond take a kicking in Phillip Noyce’s highly enjoyable double agent thriller. At a fleet, muscular ninety-nine minutes, “Salt” is the veteran director’s demonstration of what big budget Hollywood action entertainment can be: a crafted rush instead of indifferent mush. Working from a script by Kurt Wimmer that was once a Tom Cruise vehicle, it’s tightly wound storytelling that telegraphs conversational engagement with real-world issues, working less with story arcs than story trajectories. There are a half-dozen classic politically themed thrillers that could be cited in comparison to Kurt Wimmer’s script, but considering how gratifying the complications are, it would be spoiler-ish to cite them, or much of the story beyond the suspicion that the career CIA agent Evelyn Salt may be a Russian sleeper spy and that Lee Harvey Oswald’s time in the Soviet Union is invoked. The inventive, protean spy runs, and runs. (Run, Angelina, Run.) The ever-present threat of thermonuclear annihilation factors in, and further topicality comes from the release of real-life undercover agent Valerie Plame’s name by “Scooter” Libby and former Vice President Dick Cheney (Jolie starts the film as an undercover agent with Plame-blonde hair), as well as the recent uncovering of a “sleeper cell” of Russian spies. Alan J. Pakula might well applaud the sweet leaps of paranoia. Outlandish but breathless, “Salt” has an understated, near-still center of gravity: an assured, understated performance by Jolie that indicates much but reveals little. After proving himself a filmmaker with refined skills in the big-budget arena with movies like “Clear and Present Danger,” director Phillip Noyce spent a decade on smaller, arthouse projects, all sturdy and virtuous, including “The Quiet American,” “Rabbit-Proof Fence” and the little-seen South Africa-set political thriller, “Catch a Fire.” “The Quiet American”? “Clear and Present Danger”? Also fine titles for the kicky fun onscreen, proving Noyce’s artistry to be admirably versatile. As for the title, pointedly enough, “SALT” is also the acronym for Strategic Arms Limitation Treaty, which was signed by Nixon and Brezhnev in 1972, and SALT II by Carter and Brezhnev in 1979. And the nuclear footballs are still there, ready to kick. With Liev Schreiber, Chiwetel Ejiofor, Daniel Olbrychski, Andre Braugher. 99m. Widescreen. (Ray Pride)