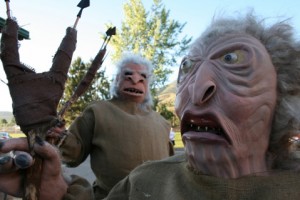 “Laughing with or laughing at?” is a question arising with more and more movies, from the trainwreck exhibitionism of a movie like “The Room” or the more tender “Winnebago Man,” in which a young filmmaker searches for a curmudgeonly figure of YouTube fun who may or may not be alive. (Oh, he’s alive; Jack Rebney is so fucking alive, but that’s another review when that movie finally opens in Chicago.) What’s most alive about writer-director Michael Paul Stephenson’s “Best Worst Movie,” a documentary revisiting the Utah town where “Troll 2” was shot in 1989, is how genial everyone is about their experience working on an almost unfathomably incompetent movie that was made with great sincerity. You might be “smiling with and tearing up at,” which was my reaction to much reaction to this oddly charming film. Here’s the setup: At the age of 10, Stephenson was the star of “Troll 2.” The man who played his father is now a beloved Alabama dentist who embraces the idea that there are audiences who love the film. Then there’s the Italian director: Claudio Fragasso, whose accent is a great Fragasso sea of mumble and harrumph. There are repetitions and a few questionable moments (such as scenes with the now-reclusive woman who played the child-actor’s mother), but at its best, “Best Worst Movie ” is a love letter to unlikely fame, a big bucket of serendipity and nonsense. Let the fans bay. 93m. (Ray Pride)