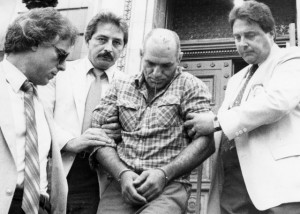 Joshua Zeman and Barbara Brancaccio’s very smart, genuinely troubling “Cropsey” revisits a tale that had been told when they were children on Staten Island, a much-embellished urban legend about an escapee from a nearby mental institution. Cropsey was the local bogeyman, the all-purpose chiller of children, handy to keep the tykes in line. But Cropsey was a real man, one Andre Rand, who was tried for the disappearances of disabled local children, and Zeman and Brancaccio’s horror documentary is a real jaw-dropper. Comparisons have been drawn to the fear-filled “Blair Witch Project” and David Fincher’s close, clammy “Zodiac,” as well as Stephen King stories and “Capturing the Friedmans,” yet the parallels are mere flattery, considering the film’s own unique savor, an alternately genial and sinister tone: I’d go more for saying this deeply paranoid chiller plays like Errol Morris in a good mood, sharing his favorite shaggy-dog story about true-life murder. And about true-life suspicion, real-world ambiguity: as in “Zodiac,” you’re hardly certain if Rand is criminal or scapegoat. “Cropsey” is small, but small like an earwig, cozying up in your memory once you’ve seen it. The local, the most personal things, will, at the best instants, always suggest the universal, and “Cropsey” does. Children must have their bogeymen, fear is cultivated like a perennial crop. I don’t want to describe Geraldo Rivera’s role in the story’s unfolding, but he’s a compelling key. (The Ghost Robot production company presentation logo that opens the film is a swift delight.) 84m. (Ray Pride)

“Cropsey” opens Monday at the Music Box; it continues after its Thursday closing on VOD on cable systems until August 12.