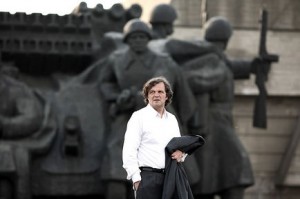 (L’affaire Farewell) “Farewell” is a diverting real-life spy thriller set in 1981, in the midst of the Cold War, pitting disenchanted KGB Colonel Sergei Gregoriev (Emir Kusturica, whose movies, including “Underground,” have scored two Palme d’Or at Cannes) and a French engineer, Pierre Froment (Guillaume Canet, director of “Tell No One”), against the bulwark of the Brezhnev-era Soviet Union. Christian Carion was Oscar-nominated for “Joyeux Nöel” (2005), and largely makes spare, intelligent work of the atmosphere of the era; who knew a pop soundtrack featuring Queen would suit such an intrigue? While President Reagan may have vouched for the importance of the case—”one of the most important espionage cases of the twentieth century”—Fred Ward’s casting as Reagan is one of the more disturbing bits of impersonation in memory. Still, the play between Canet and Kusturica works beautifully. “One quickly learns to lie, no?” Gregoriev asks Froment in one meeting in a park. Living in “mensonges et solitude”: lies and solitude, he says. For a brief moment, it is the two film directors, as well as their characters, as their roles, communicating with each other. They’re both touching performers, and you want them to survive, even as unprepared as they are for the weight of a world of spycraft. With Willem Dafoe, Alexandra Maria Lara. 112m. (Ray Pride)