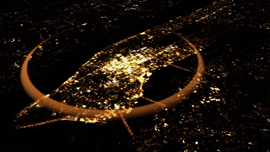 The prescriptive yet apocalyptic anti-nuclear proliferation documentary “Countdown to Zero” has you reaching for the comforting simplicity or even banality of song lyrics; not necessarily Radiohead’s “Reckoner,” which plays at extended length, or The Cure’s “M,” (“ready for the next attack”) but something like Flaming Lips’ “Do You Realize??,” as in “Do you realize that everyone you know someday will die?”

Yes, the topic today is thermonuclear Armageddon, which would offer perhaps only half an hour of anticipation followed by a second of detonation, illumination and incineration. “Countdown to Zero” does not shy from the toxic poetry of the prospect of annihilation. Hair-raising, bloodcurdling and wholly despairing, this cry-of-the-mind from the producers of “An Inconvenient Truth,” Lawrence Bender (“Pulp Fiction,” “Inglourious Basterds”) and Participant Media, is chock-full of fascinating material and articulate interviewees from former spies to statesmen, as assembled by talented writer-director-for-hire Lucy Walker (“Blindsight,” “Devil’s Playground”). For instance: What’s the best way to hide fissile material being smuggled across the sea? Put it inside a cargo container filled with kitty litter; kitty litter triggers radiation detectors.

The film relies on two organizing principles, the first from an address by President John F. Kennedy to the United Nations in 1961, “Every man, woman and child lives under a nuclear sword of Damocles, hanging by the slenderest of threads, capable of being cut at any moment by accident or miscalculation or by madness. The weapons of war must be abolished before they abolish us.” Walker returns again and again to bits of those phrases, as well as one of several blunt statements from former CIA operations officer Rolf Mowatt-Larssen: “There are three ways to acquire a nuclear weapon: you can steal a bomb, you can buy a bomb and you can build a bomb.” “Countdown to Zero,” which could be called “Another Inconvenient Truth,” demonstrates how each of these can be accomplished, with an emphasis on sinister footage of Iranian President Ahmadinejad. One segment displays a possible budget of $6,883,000. The most eccentric image is from stock footage of a key being turned in a missile-launch silo; above the cylinder is a bit of Dymo tape reading: “GENTLY.” The most shocking revelation? An incident that could have led to a Soviet-U.S. missile launch prevented by one man: “Fortunately, Yeltsin wasn’t drunk.”

But the gut-punch comes from visuals, like an early sequence of dreamy angels’ eye views of cities, Shinjuku neon, traffic coiling the Coliseum in Rome, the Chicago skyline with a bold red-orange streak of dusk behind its buildings. All ready to melt. The first fit of extermination porn comes with a montage of terror attacks that begins with detonations captured by surveillance cameras in Madrid and then footage from Bali, London, Riyadh, Mumbai, Oklahoma City but has the discretion to insert only after-the-fact footage from the World Trade Center. In each case, ash rises, ghosts of just-past blast. Images of a Pakistani mountain liquefying during a nuclear test are accompanied by shrieks of “Allah is great!” that one hopes were not added in the editing. (Newspapers aren’t shown in their original form, but in sloppy mockups, including from a nonexistent paper called the “London Times.”) Depending on one’s inclinations, a late montage that intercuts revelers on New Year’s Eve in Times Square with computer simulations and a fast-cut voice-over from multiple interviewees enumerating how savage and sudden and deadly even the smallest of nuclear blasts would be, will come across either merely ghastly or provocatively obscene. It would be the fastest form of global warming.

J. Robert Oppenheimer, one of the fathers of the bomb, is seen in archive footage using a term of art for the unleashed potential of the bomb: “Technically sweet. When you see something that is technically sweet, you go ahead and do it.” And, as he quotes later from Bhagavad-Gita, you “become destroyer of worlds.” His large, clear eyes seem to have envisioned the worst potential of what he has unleashed.

But the press kit offers more earnest notes than Oppenheimer’s haunted visage, as when Walker explains all the roles she played on location shoots around the world: “I recorded almost all of the sound myself, which I prefer for three extremely important reasons: it reduces our budget; it makes for a more intimate shoot; and, given all the travel involved, it reduces our carbon footprint.”

Is it propaganda? Yes. Virtuous in its intentions and profound hopes—the title refers to a countdown to the end of all nuclear weapons, starting with ending rapid-launch capability for missiles—and a bit of a mess, it’s also a 3-D documentary: you walk away from its kaleidoscope of deadly images, more shaken than stirred, into the city, grateful for its tumult and form.