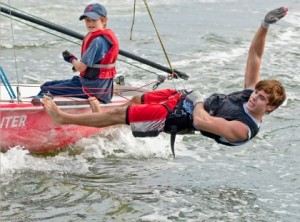 Charlie St. Cloud (Zac Efron, “High School Musical 3,” “Me and Orson Welles”) flatlines in an ambulance after a car accident. Paramedic Florio (Ray Liotta) calls it a miracle when the high-school senior revives. En route to the ER of their coastal Washington state town, Charlie sees the lifeless hand of his younger brother Sam (Charlie Tahan) dangle from another guerney. Five years later, Florio is dying of cancer and tells Charlie his second shot at life was a gift: “God doesn’t show off. There’s got to be a reason.” Before this decent romantic sniffler is over, Charlie will see another hand of a loved one hang over a hospital bed. In the meantime, he sacrifices his sailing scholarship to Stanford to work as the live-in caretaker at Seaside Cemetery, where he tosses around a baseball with dead Sam every day at sunset. Charlie also talks with a high-school pal who died in Iraq. Another classmate, Tess (Amanda Crew), rekindles Charlie’s love of the sea and life, even though at one point he finds her asleep on the grave of her late father. Writers Craig Pearce and Lewis Colick adapt the 2004 novel “The Death and Life of Charlie St. Cloud” by Ben Sherwood, relocating the setting from New England to the Pacific Northwest. Or rather, over the border, where British Columbia’s highway signs tout “Super, Natural B.C.” This afterlife is heartwarming, if over-frosted with sweet gooey CGI sunsets. There’s no bloodsucking or throat-slashing, as seen in this summer’s other young romance franchise set nearby. Director Burr Steers sails far from the brotherly love found in “Igby Goes Down” (2002), his far less teary writing and directing debut. Although there are elements shared with Nicholas Sparks films, Steers is less trite in this mildly gothic romance of undying love blessed by St. Jude. With Augustus Prew, Donal Logue, Kim Basinger. 100m. (Bill Stamets)