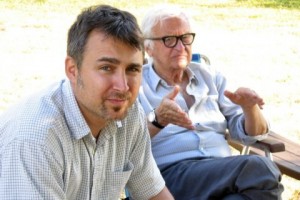 A labor of love, and such a large portion! Cheery, bawdy, big-hearted and whole-heartedly celebratory, New York Times journalist Andrew Jacobs’ “Four Seasons Lodge” is time well spent within a Jewish summer community with an elderly group of friends, largely nonagenarian, at an upstate New York retreat in the Catskills, all survivors of Auschwitz. Working with cinematographer Albert Maysles, Jacobs stays close to his subject’s play and verbal give-and-take. This is observant documentary making that rises above the need for sturdy structure or rigid plotting. People, faces, places, hope, joy, survival, creating a network of friends when family has been taken: all superb ingredients. The underlying irony that in their fading years, their camaraderie is situated in a camp they call “the colony” does not have to be strained. It would be wrong to class this poignant, sometimes joyous film as a “Holocaust documentary”: it’s simply human, simply humane. “Life can be beautiful, even when it’s not so easy.” 97m. (Ray Pride)

“Four Seasons Lodge” plays Sunday-Monday and Wednesday at Siskel. The trailer is below.