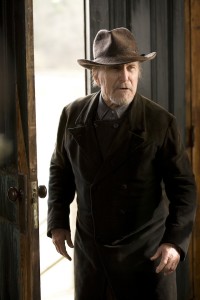 Get small: cinematographer-turned-director Aaron Schneider’s debut, “Get Low,” a wry, Depression-era hermit fable is a small-scale, quietly intense showcase for how modesty can carry the day, notable for minimalist performances from Robert Duvall, Bill Murray and Sissy Spacek. A Joliet native whose photographic work includes second unit “Titanic,” and cameraman for “Simon Birch” and “Kiss the Girls,” Schneider’s years-long path to “Get Low” includes “Two Soldiers,” an adaptation of a William Faulkner story that won the Best Live-Action Short Film Oscar. His affinities for stories about the South are reflected in small-town 1930s settings that look as if they were built after the Civil War. (He confirms that he used Flickr and Google Maps to find likely locations near their Georgia production base.) David Boyd captures quiet rusticity,  rural shadow and dark, that offers a nod to cinematographers Schneider admires like Gordon Willis and Conrad Hall, who made moody, striking frames, in service to the story, story always in foreground. As Felix Bush, Duvall embodies a man of few words and strong gestures whom you realize, by film’s end, has always been in control. Murray, as the hungry Chicago-bred funeral director Bush enlists to produce his “living wake”—he wants to hear all the stories people down the hill have told about him for decades, no matter how imaginative or cruel—is line-for-line, perfection. As the story comes to its close, there are explanations that could have been left more mysterious: Bill Murray’s lips to Scarlett Johansson’s ear in “Lost in Translation,” unheard, comes immediately to mind. What drives a man like Bush into the deepest, most solitary parts of his heart? Getting to watch and listen to his flinty, controlling self is treasure enough.  100m. (Ray Pride)