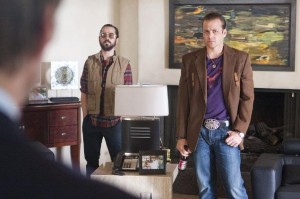 “Based on a true story,” states an opening credit of this slight business comedy. The press notes for “Middle Men” hedge. “This story is highly fictionalized,” states producer Christopher Mallick, former CEO of Paycom Billing Services and present owner of ePassporte and Oxymoron Entertainment. Director George Gallo and co-writer Andy Weiss (thirty-two episodes of “Punk’d”) are paid by this middle man from Texas to put another Texan, Jack Harris (Luke Wilson) on the screen. “Middle Men” places viewers at the birthplace of internet porn. Jack builds a business plan for the online credit-card program invented by two dissolute L.A. entrepreneurs (Giovanni Ribisi, Gabriel Macht) tied into a Russian strip-club crook (Rade Serbedzija). They take a transaction fee for disguising credit-card bills. Their third-party go-between, incorporated with an innocuous name, does not itemize site visits to “Young Tight Pussy” and other giveaways that online porn is being purchased. Too much is said in the film, however. Over thirty titles identify cities and sometimes the hour and minute of a scene. Jack’s voiceovers are excessive and cliched: “You see, life is all about choices”… “What I heard next, I could not believe”… “A chain of events I could never imagine.” MBA ethics instructors might find the cautionary “Middle Men” less useful than “The Informant!” if more entertaining than “Love Ranch.” Left out are The Communications Decency Act and the Association of Sites Advocating Child Protection. Both date from 1996 and merit extras on the DVD. With Jacinda Barrett, Laura Ramsey, Terry Crews, Kevin Pollak, James Caan. 105m. (Bill Stamets)