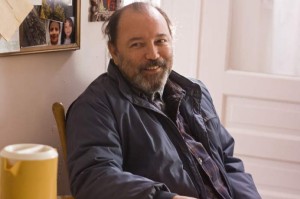 Victor Nuñez is known for getting exemplary, unexpected performances from his actors, ranging from the incandescent Ashley Judd in “Ruby in Paradise” (1993), and a hyper-reflective Peter Fonda in “Ulee’s Gold” (1997). Those roles may be career bests for those actors. (Nunez’s 2002 “Coastlines,” a prodigal son crime story, didn’t reach those heights.) In “Spoken Word,” Kuno Becker plays Cruz Montoya, a San Francisco veteran of the spoken-word poetry circuit who’s presented as a reflective wordsmith, a rock star of a romanticized poetry scene. The score by Michael Brook as insistent as some of the lines the character pens: urgent, fluttering surface. There’s trouble: Montoya’s schoolteacher father (Ruben Blades) is dying, and the black sheep returns to tend to his needs, yet quickly falls back into the life he led in Santa Fe as a young man. Crime! Prodigal son! The love of land! The necessity of legacy! Nuñez’s portrayal of the tendering of language as well as of willful acts necessary to portend redemption ring equally inauthentic, yet there is a romantic, hopeful air to the literal-minded, hand-wringing story. More simply put, I didn’t believe a minute of it, but Nuñez seems invested in each and every cliché. Blades brings dignity to his role, even when called upon to vomit. The screenwriters are William T. Conway (“Walker, Texas Ranger”) and Joe Ray Sandoval, a spoken-word artist who wrote the verses we hear on screen. With Miguel Sandoval, Persia White, Tony Elias, Monique Gabriela Curnen. 117m. (Ray Pride)