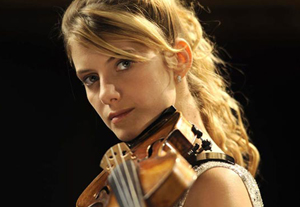 Writer-director Radu Mihaileanu and co-writer Alain-Michel Blanc conduct a satisfying rendition of the underdog turnaround formula, with happy tears of sentimental justice in the last bow. Andreï Filipov (Aleksei Guskov) is the janitor at the Bolshoi Orchestra. Scrubbing the underside of his boss’ desk one day, he steals an incoming fax from Paris: in two weeks there’s an unexpected opening at the Theatre du Chatelet; could the Bolshoi play that evening? Back in 1980, Andreï was the star conductor of the Bolshoi. General Secretary Leonid Brezhnev of the Communist Party of the U.S.S.R. ordered his demotion for not ejecting his Jewish musicians, including a star violinist who would go mad and die in Siberia. Andreï had his baton snapped as he conducted Tchaikovsky’s Concerto for Violin and Orchestra in D major. Now he will finish that career-ending concert, if he can round up his former colleagues and sign up a very special Paris-based violinist (Mélanie Laurent), born in 1980 and never told of her past. Moscow is satirized by the sideline of Andreï’s wife (Anna Kamenkova): she puts bread on the table by finding extras to show up as mourners at gangster funerals and as protesters at C.P. marches. With boosts of all sorts from stereotypical gypsy allies and obligatory last-minute obstacles from apparatchiks, the big night arrives. Camraderie and catharsis trump cadre. With Dmitri Nazarov, François Berléand, Miou-Miou, Valeriy Barinov. 107m. (Bill Stamets)