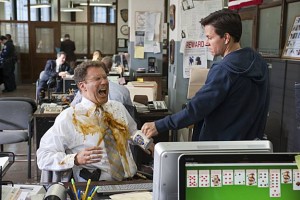 Two hardbody NYPD gloryhounds, played by Dwayne Johnson and Samuel L. Jackson, open this cop buddy comedy with a high-speed chase, shoot-out and fireball at Trump Tower that amps up their celebrity status. (Outlets covering the subsequent press conference on the steps of city hall include “New York Observer, uh, online” and “TMZ, print edition!”) Way back in the background at the precinct are another duo, accountant Allen (Will Ferrell) and his partner Terry (Mark Wahlberg), who’s overeager to get out of the office and into the street. These two detectives get on the case of a global investment conman (Steve Coogan) on the verge of gutting the NYPD pension fund. Adam McKay directs a crack-up script co-written by Chris Henchy. McKay has made earlier comedies with Ferrell—”Anchorman,” “Talladega Nights” and “Step Brothers”—that draw from the same persona and playbook. “The Other Guys,” though, may get more and smarter laughs than earlier projects aiming for younger audiences with grosser tastes in yuks. The expected homosexual panic, for instance, is notably more refined in bits about ballet dancing and harp playing. (And no one gets it in the nuts.) The single vomiting occurs out of frame. This is superior “Saturday Night Live” style, without the fatal link to particular characters or routines that tripped earlier “SNL”-branded films. Linking setpieces about Ferrell’s signature insecurity and improbable potency works better in features than live sketches on the small screen, where McKay is credited with contributions to 125 “SNL” episodes. If the machinations of undoing the bad guy are underplayed, due diligence is found in end credits packed with recent statistics on bailouts, bonuses, salary ratios, 401Ks and NYPD pension payouts. With Eva Mendes, Michael Keaton, Ray Stevenson and Derek Jeter as himself. 107m. (Bill Stamets)