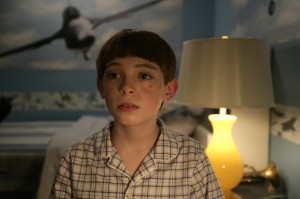 While awaiting a conversation with Todd Solondz outside a boutique hotel room, a recording of urgent, furious songbirds echoes down the corridor. Another chorus awaits inside.

The 50-year-old writer-director’s latest movie is marbled through with his bleak, black humor, but there’s a shell-shocked character to the figures in his story. Living lives they can’t manage in a society they can’t reckon with, they all seek some manner of forgiveness. The words “forgive me” echo like the word “fuck” in a Judd Apatow movie. On one level, this newest film is a variation on his 1998 “Happiness,” where those figures are played now by other actors (such as Paul Reubens for Jon Lovitz). That carapace is readily shed even a few scenes in. Despite his penchant for shock, Solondz seems to have crafted an empathetic, if dark fable for “Life During Wartime.” The pedophile from “Happiness” is released from prison just as his youngest son, Timmy, anticipates his bar mitzvah. To be a man is to understand what happened to his father, what terrorists are, what 9/11 means. The shroud of the past decade cloaks all his characters like the Holocaust did an earlier generation (a linkage which the script does not shirk).

Aside from his perspective as a middle-aged college teacher with a young son, Solondz gains from tremendous performances—Allison Janney, Ciaran Hinds, and a fantastically fierce self-willed “monster” embodied by Charlotte Rampling—and cinematographer Ed Lachman (“I’m Not There”), working with a flushed palette that stylizes the images of the RED digital camera. Solondz’s interviews often cover the same themes and quips, but I wasn’t expecting an almost ten-minute disquisition that jammed in his concerns. I bring up how the characters wanted this unnamable forgiveness (which they attempt to name) and we were off to the races. “Kind of a release, a relief. Solace! I don’t know about redemption, but solace. It’s funny, a lot of people seem to think, some people say, there’s no redemption but for me, I don’t know if there’s redemption, but there’s surviving.”

A slight pause, not big enough to slip through. “For me, Bill Maplewood [the pedophile played by Hinds in this film] is not a sympathetic character, I don’t think I could sympathize, I just have no sympathy for a man who commits such crimes. His son says to him, I have no sympathy for you. But of course even as he says that, we know that he loves his father and yearns for his father and that’s what makes it so difficult. But he’s a tragic figure, not a sympathetic one; he’s tragic, tragic insofar as this is a man who loves his son, who’s a great father. That is what is compelling. Look, the whole idea of the pedophile, for me, pedophilia per se is of no interest for me, but as a metaphor for that which is most demonized, feared, loathed and etcetera, I don’t think you can do better. There’s nothing, I mean, Americans would welcome Osama bin Laden at their table before they would break bread with a pedophile, although they might have in the past and not known it. That’s the pinnacle, the nadir. People say they love humanity, or embrace mankind, but what does that mean? Those are abstractions. It’s without substance.

“We are only to be defined by our limits. That’s what makes us human. You may have a set of parents of a certain religious persuasion, their kid is raped and murdered, yet they see it within themselves to forgive the criminal. Another set of parents, a different philosophical mindset, the same thing happens to their child, and they seek only vengeance. They’re both valid responses. My movie is not prescriptive. But it is exploratory. And it is of a kind of moral dilemma or conundrum that we live with. I think that the writing of it is infused with a lot of the spirit of someone who is responsive to the sense of insularity that characterizes this country at war, regardless of who’s president. From the Twin Towers collapsing, the trauma of that happens, then there was this beautiful moment, everybody was saying how can I help, what can I do? It was very precious, a unique moment.”

A breath! I venture, for that moment, we were America, we— “At that moment, but not in a banal, patriotic, jingoistic sense, but in a very earnest, very felt sense, what can I do? No one can forget Giuliani’s response, ‘Go shopping.’ It was like a slap in the face. The semi-subtext there of going shopping is that it’s a way to insulate oneself from the reality of a country going to war.”

Solondz unexpectedly cites some artists he and Lachman use as visual touchstones and templates rather than pastiche. “Yeah, yeah, it can be a shorthand, the grandmother’s condominium, we immediately said, Antonioni, ‘Red Desert.’ It’s just shorthand to see we’re seeing the same thing here. Oh, we’re doing a Stephen Shore, or it’s an Eggleston moment we’re having here, it’s not self-conscious, but it’s a reference point to help. We’re fluent in these references enough that we know what we’re talking about, we get excited you find the poetry, the something, but it’s something you have to discover, it’ s not something you can plan but you’re so much at the mercy of what’s available, what you can find.”

“Life During Wartime” opens Friday at the Music Box.