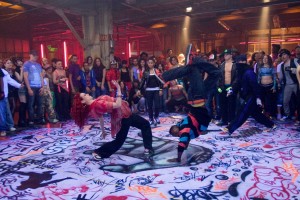 The third “Step Up” film turns up the dance technique to “dazzle” on the dial, and dumbs down the storylines of “Step Up” (2006) and “Step Up 2: The Streets” (2008) to new lows in laughable. In literal brightness, though, Ken Seng’s digital 3D cinematography beats this year’s other releases in that retooled format. After two installments set at Maryland’s School of the Arts, writers Amy Andelson and Emily Meyer relocate this one to New York CIty. “Hip-hop fairy tale,” to use the tag in the film’s publicity, especially fits. The first two were merely simple-minded stories of teens dreaming of dancing and doing it. This one stuns with its godawful simplicity. Condescension is the only option. If you didn’t look down, you’d miss it, so oblige and enjoy the show. Moose (Adam G. Sevani) says goodbye to his parents, who trust he’s said goodbye to dancing and hello to electrical engineering. But in the next step, he skips his freshman orientation at NYU and dances up mayhem in Washington Park. “Family is family” is the tautological mantra of this fantasy. Family equals dance crew. (Moose’s dad, on screen for under a minute, is the only one to appear in all three films.) Like a backstage musical, this sports dance numbers that upstage the tossed-off plot. Although the choreography and camerawork are nothing like Busby Berkeley’s, certain sequences of eclectic street styles and cheerleader athletics evoke his deco machine aesthetic. Apart from dancers mimicking robots, editor Andrew Marcus appears to trick out performances with accelerated staccato effects. Super-human kinetics replace the lower velocity, longer-take kaleidoscopic spectacles that Berkeley choreographed. “Step Up 3D” offers no ethnographic claim of non-manipulation like the one David LaChapelle placed in front of “Rize” (2005), his documentary about the L.A. krump dance scene: “The footage in this film has not been sped up in any way.” The other documentary that comes to mind is “Paris is Burning” (1990), Jennie Livingston’s look into the competitive drag voguing subculture where the House of Ninja, House of Chanel and House of Xtravaganza competed in balls. In the LGBT-free “Step-Up 3D”–where House of Pirates battles House of Samurai and House of Gwai–director Jon M. Chu (“Step Up 2: The Streets”) makes a ludicrous mention of Andy Warhol’s famous art loft at East 47th Street called The Factory. Chu’s imaginary clubhouse at “655 West St.” designed by Devorah Herbert owes more to “Oliver Twist” minus Fagin. Here the ruffians are an international crew of limber refugees and the Artful Dodger is the orphan Luke (Rick Malambri) who is five months behind on his mortgage. Will his evil ex-crew mate, an orphan with a trust fund, steal his props and his property? Will he drop dancing and step up to directing at the California Film Academy? So what? The dance stuff is a treat with a beat. There’s an inspired nod to the iconic number in “Singin’ in the Rain” (1952) that is just terrific. With Alyson Stoner, Sharni Vinson, Keith Stallworth, Kendra Andrews, Stephen “tWitch” Boss, twins Martín and Facundo Lombard. 97m. (Bill Stamets)