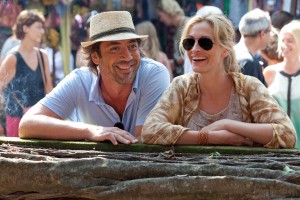 Almost three days and I still feel like a python that hopes to digest some large creature wrapped up in a thick Turkish carpet. If “Eat Pray Love,” Ryan Murphy’s inert adaptation of Elizabeth Gilbert’s beloved, best-selling memoir of spiritual exploration (adapted by himself and Jennifer Salt) could wring out the weight of tears that have stained its pages in thousands of copies, it will make a fine fortune. Reportedly, the book’s epiphanies of a fortysomething seeker with a moneyed life hitting the road evoke spiritual qualities that a raft of readers found moving. Unfortunately, Murphy’s movie is ethnographic tourism of a low order. Julia Roberts makes an ideal embodiment of an entitled narcissist—me me me—who learns almost nothing other than a couple of words in Italian that she lords over others. The extensive narration is a model of tell-don’t-show. Sound effects are Mickey-Moused: the line “everybody needs a husband” would be accompanied by the loud burst of a cock crowing. It’s the aural equivalent of the aphorisms narrating her life lessons. To make a satire-cum-pastiche of the latterday “women’s picture” this accomplished requires a cruel and uncommon sensibility, and you can only assume that the producer of “Nip/Tuck” and “Glee” is putting on. Right? Really. C’mon.

The credits are at the end, and not knowing who had shot the movie, I wondered how he or she had earned the finely wrought balls to parody the patented, hot-white-over-your-head, hot-white-behind-your-hair, hot-white-out-the-window light of Robert Richardson (“JFK,” “Inglourious Basterds,” “Kill Bill”). Come the end credits, oops! Mr. Richardson has signed the work. (Each and every flyaway hair of Roberts’ blonde hair is backlit in flight.) In the digital projection I caught, close-up shots of food are magnificent, neither documentary nor obscenely overwrought, but love, love, love: there is a plate of prosciutto and figs that I would have taken home to live with me. (The foodie bits are of a different timbre than those in “I Am Love,” but toothsome nonetheless.) Yet in wider shots, the movie turns again and again to slapdash travelogue, with badly cast extras distracting from scenes in Rome, India and Bali, each individual standing out because of their looks or from inappropriate actions. Worse is the editing in almost every scene, which obliterates any sense of spatial continuity, which would show what it’s like to be in these exotic locations, rather than spinning around Google Street View on an iPad. There are sequences that cut together shots that circle around characters, then fumble close and long shots and often include a tic of the camera at some remove traveling diligently to the right or to the left as if it were sneaking away on its dolly rails out of polite embarrassment for being an accomplice to such levels of technical ineptitude. (You could count the close two-shots of Javier Bardem and Roberts at the ending in this category, where his vast ursine head makes hers look no bigger than a peanut.) More movies ought to be made about women and their weight in the world, but it’s a terrible thing when they’re constructed with such basic inattention to the seductive and beautiful elements of filmmaking. While Murphy’s first feature as a director, “Running with Scissors,” suggested several more editors ought to have, “Eat Pray Love” looks like the work of someone who’s never seen a movie: watched, perhaps; seen, no. The male actors include Billy Crudup, James Franco and Richard Jenkins, whose performances range from the sheepish to the bemused. The film is chaste; its PG-13 rating is largely for several shots of a man’s ass and an unfunny “motherfucker.” So if “Eat Pray Love” makes its expected bounty, can we have a sequel, “Marry Fuck Kill”? 133m. (Ray Pride)