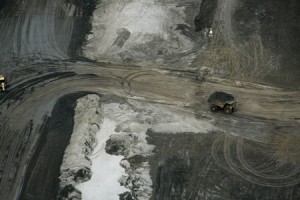 Chills, baby, chills. In “Petropolis: Aerial Perspectives on the Alberta Tar Sands,” Canadian filmmaker Peter Mettler, whose visionary work includes “Gambling, Gods and LSD” (2002) takes to the skies above that province to explore the vast industrial forces being assembled to draw out the 200-million-year-old fossil fuels in the world’s second-largest reserve. Shooting in high definition, Mettler’s work is almost entirely image and sound, moving from placid natural beauty to man’s remaking of the landscape. Like his countryman, the photographer Edward Burtynsky (who is thanked), Mettler is unsentimental. This is what is in front of us, this is what lies beneath, this is the skin and surface of our planet. And while the film was made for Greenpeace Canada, “Petropolis” isn’t an activisit tract or merely evidence and witness. It holds terrible beauty and fierce horror. The score and sound design are impeccable, of a piece with Mettler’s insistently paced imagery. Shown with Jorge Rivero’s “La Presa” (The Dam) about how growth returns to a flooded valley. Program 59m. (Ray Pride)

“Petropolis” plays August 13 at 8pm at Chicago Filmmakers, 5243 North Clark. A trailer is below.