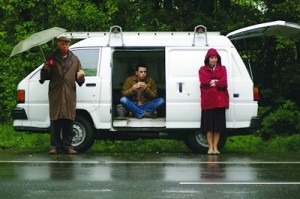 Filmmaker Paul Cotter has told film-festival audiences that his captivating directorial debut, “Bomber,” was made for “less than the cost of a Prius,” and it’s one of the most accomplished no-budget movies I’ve seen in months. The contours of the story—grown son hits the road with his aging father and mother to make amends with the father’s past—could make it sound like any number of movies, like “Little Miss Sunshine,” but it’s always in the details, isn’t it? As a writer and director, Cotter’s eye for humor and simple human behavior is assured. And the father’s compulsion to return to Germany sixty years later to “apologize” for bombing a village is an inspired taking-off point. He’s seen the damage from the sky, and now he wants to see what’s there on the ground. And what’s on the ground? A bickering family. The acting has a genial ensemble flavor, but Shane Taylor (“Band of Brothers”), playing the son, invests himself fully in the character. It’s the family’s self-knowledge that grows from the impulse to apologize, making “Bomber” all the richer. Cotter’s widescreen images are beautifully composed: any thought of his tiny budget will quickly disappear. It’s common for reviewers to say that you look forward to the second feature of a debut director; I look forward to seeing “Bomber” again, on the big screen. (Cotter cites the example of Abbas Kiarostami—”Taste of Cherry,” “Ten”—whom he met in a 2005 workshop, as his inspiration to go to Germany with three actors and a crew of seven.) With Benjamin Whitrow, Eileen Nicholas. 85m. HDCAM video. (Ray Pride)

“Bomber” plays Friday-Tuesday and Thursday at Siskel. A trailer is below.