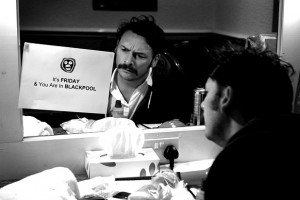 Brit comedy group The Mighty Boosh are followed by filmmaker Oliver Ralfe through the ninety-nine dates of their Future Sailors Tour, crossing the UK and Ireland in a huge bus. Fans of their surreal 2004-2007 BBC series will get the most from the off-hours exposure of stars Noel Fielding and Julian Barratt, which emphasizes, as any honest doc about touring will, the exhaustion, the grind, the mundane, but also their quiet professionalism in honing their work day-to-day, moment-to-moment. Grant Gee’s Radiohead tour doc, 1998’s “Meeting People Is Easy” remains the gold standard of the small genre, but “Journey” has its rewards, especially in its choice to follow process rather than rely on nothing but clips from the live presentation. 82m. (Ray Pride)

“Journey of the Childmen: The Mighty Boosh on Tour” plays Saturday and Wednesday at Siskel. Their feature “Bunny and the Bull” opens Friday for a week-long run.