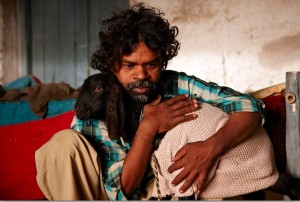 One of the richest surprises of the summer is the pungent “Peepli Live,” writer-director Anusha Rizvi’s vivid, bustling satire, in the vein of Billy Wilder’s “Ace in the Hole,” or should we say, opening a vein as “Ace in the Hole” does. Natha (Omkar Das Manikpuri) is a poor famer from the small town of Peepli, and if he can’t pay back a government loan, he’ll lose his land. Thoughtfully yet creepily enough, the government also offers aid to the survivors of farmers who commit suicide. Natha’s brother advocates this course of action, Natha tentatively agrees, and soon the big carnival of media and politicians swoop down on Peepli, sweeping Natha’s grave decision out of the way with their own goals and agendas. Rizvi wrestles with Indian village-versus-city issues with bawdy wit and ample charm. Talking to producer Aamir Khan recently, he told me that “Peepli Live,” the first Indian movie to play in competition at Sundance, is indeed atypical of modern Indian filmmaking, and its dark undercurrents make it atypical of much of what’s called independent filmmaking in this country. Khan, who’s starred in movies like “Lagaan” and the recent “3 Idiots,” says he considers it important to use his position as a leading star who sometimes produces to get films like this made and into the discourse of Indian filmmaking, both at home and in the diaspora abroad. What’s most admirable about the bustling “Peepli Live” is that it’s not only an issue film or a political statement per se, but simply a terrifically made movie with an observant eye toward the virtues of village life and the need for its preservation. There’s also an indelible, melancholy ending that lands with a gentle, but effective punch. What becomes of anyone whose story is taken up by others? Rizvi’s use of music, both songs and score, is a major plus. With Raghubir Yadav, Malaika Shenoy, Nawazuddin Siddiqui, Shalini Vatsa, Farrukh Jaffer, Vishal O Sharma. 106m. (Ray Pride)