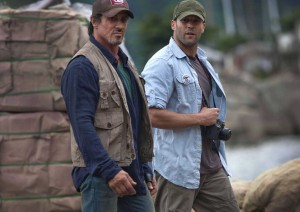 Another all-boys, bang-bang, blow-up-stuff action film distinguished only by the unusually large number of action stars on the poster and payroll. In its juvenile fear of females, “The Expendables” beats the recent mercenary camaraderie films “The Losers” and “The A-Team.” Although talk of feelings is off limits, feeling “dead inside” is a badge of honor for these guys, both the good ones and bad ones. Sylvester Stallone directs and stars as a leader of a freelance special-ops team. Their hangout is a tattoo parlor that serves as a bikers clubhouse when they’re not hired to neutralize Somali pirates or to do other dangerous out-of-town errands. Stallone boasts he did “over 100 drafts” with co-writer David Callaham, who calls their collaboration “by far the most unbelievable experience of my career–something I will never, ever forget… it’s a story I’ll get to tell for the rest of my life.” Their characters quote Nietzsche, read “The Survivors Club” and dub a plot point “Bad Shakespeare.” The most fun must have been making up names such as Hale Caesar, Lee Christmas, Toll Road and Ying Yang. And my favorite: James Munroe for the ex-CIA suit who hijacks a Latin American island country to cultivate coca. Paine is his cruel enforcer. “They came with money. Some Americans,” reports the local generalissmo’s daughter (Brazilian actress Giselle Itie, who’s proud of doing her own water-boarding stunts.) Much explodes and many nameless stuntmen die. All to a numbing, hammering score with breaks for retro rock classics by Mountain, Thin Lizzy and Creedence Clearwater Revival. Takeaway truth: “Friends die together.” With Jason Statham, Jet Li, Dolph Lundgren, Eric Roberts, Randy Couture, Steve Austin, Terry Crews, Mickey Rourke, David Zayas and cameos by Bruce Willis and Arnold Schwarzenegger. 103m. (Bill Stamets)