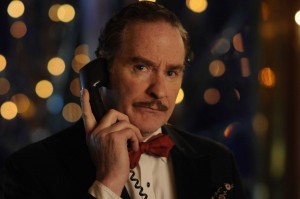 Louis Ives (Paul Dano, “There Will Be Blood”) entertains notions of living in Manhattan as a novelist, but his fate is to live like a character in a novel, or a film based on a novel. The only novel he is ever seen reading in “The Extra Man” is “Washington Square” by Henry James. Never is he shown writing, or thinking or talking about writing. An indiscretion with a bra in front of the mirror in the faculty lounge cost him his position as a prep-school teacher. He moves into the apartment of Henry Harrison (Kevin Kline), a mannered Manhattanite who once knew prospects as a playwright. After squandering his inheritance abroad, he’s lived for decades as a freeloader and flatterer amidst society ladies in need of gentlemanly attention. “I can advance you socially,” Henry promises Louis. Neither character is little more than a fussy drawerful of quirks. Louis is curious about cross-dressing. He gets nowhere with co-worker Mary (Katie Holmes) at the environmental magazine where he ineffectually sells ads. A diverting guest at dinner parties, Henry spouts an opinion on the literary advantages of partitioning of men and women in society: “The Muslims might produce another [F. Scott] Fitzgerald.” Director-writers Robert Pulcini and Shari Springer Berman (“The Nanny Diaries,” “American Splendor”) adapt a novel by Jonathan Ames for a mildly comic study of eccentric parasites. The screen, though, may not offer this pair the same comforts as the pages of James and Fitzgerald. “The Extra Man” is itself a tony hanger-on ill-suited to earn its keep. With John C. Reilly, Marian Seldes, Jason Butler Harner, Alex Burns, Cathy Moriarty. 108m. (Bill Stamets)