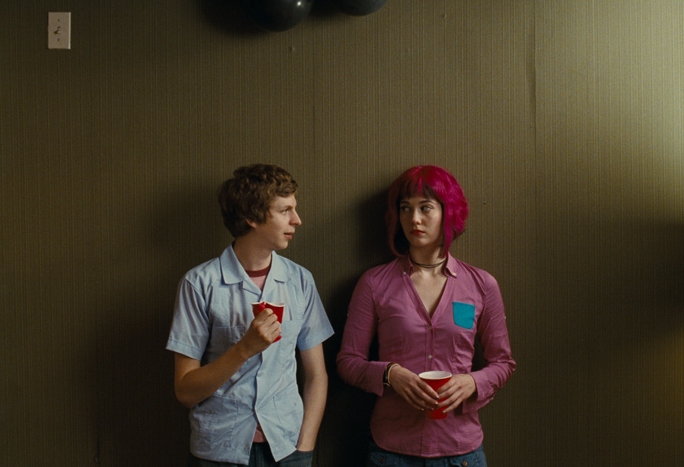 “Scott Pilgrim vs. The World” is British writer-director Edgar Wright’s third feature, his first on a studio budget as well his first without Simon Pegg and Nick Frost, his cohorts on “Shaun of the Dead” and “Hot Fuzz.”

Epically understated Michael Cera stars instead as the title character, drawn from Bryan Lee O’Malley’s Canadian comic, a still-unformed Toronto layabout and musician who hasn’t learned to love so well, still smarting from his last dumping and spending platonic time with a high-school girl named Knives Chau (the insanely lovely, chipper and inappropriate Ellen Wong). Meeting one Ramona Flowers (ever-taciturn Mary Elizabeth Winstead) in a T.O. dive, Pilgrim unwittingly finds himself cast into a battle for her against “seven deadly exes.” The jokes and riffs and sight gags are relentless, and for the first half-hour or so, come as fast and furious as an old Warner Bros. cartoon. (There’s a large, lovingly cast crew of characters as well.) References to arcade games of twenty years ago are woven into the text, but there’s a generosity of comedic spirit that requires no footnoting. More daring is the lack of backstory: Pilgrim is hurled into battles royale at a running start.

The six volumes of the comic, Wright tells me in an interview along with Cera, explain things a little more, “but in quite a flippant way, in only a couple of little asides, like peanut gallery lines, literally, to explain the subspace a little bit more. They never really explain the fights. The only line is something like almost a sarcastic aside.” Pilgrim’s reaction grows into comic weariness at being cast into yet another pitched battle that’s part anime, part videogame and all kinetic annoyance. It’s “Speed Racer” brought down to earth, or Ontario at least.

“There’s a feeling you’re watching this wish-fulfillment daydream,” Wright says. “And also I tried to make the fights work like production numbers in old MGM musicals, which is bust out into the big song-and-dance routine and then the story continues through the fight and then they go back to dialogue at the end. It’s just about the technique of expression rather than the fact that, ‘Holy shit, he just killed a man!'” He and Cera laugh and Wright’s hair falls into his eyes. “That was definitely something that when reading the first book, and there’s a fight at the end, the biggest challenge in adapting was, ‘Wow, how do you pull off that tone on the big screen?’ My approach was to just present it as matter-of-fact.”

Kubrick said you have seven minutes to set a world, and of ” Groundhog Day,” Harold Ramis has said, man, if we explained it, there was some kind of curse, he’d lost a bet, it would stink. “That’s true,” says Cera, nodding. “Yeah, absolutely,” says Wright. “It came up. We did about five test screenings with this film, and after the first test screening, it came up, we have to explain the fights. And I was like, that would just kill us stone dead if we did.  When we did this in ‘Shaun of the Dead,’ it’s the same thing like in ‘Night of the Living Dead,’ the original George Romero film, they never explain why the zombies are there. Because you figure the people on the ground, with those kind of chaotic news reports, they don’t know, either, so why should the audience? It’s more scary, the not knowing. It just happened.”

The soundtrack is rich with cartooned joy, from the opening Universal Pictures fanfare being played as a 1980s videogame tune; later the real sting shows up. Wright smiles. “This is my third film, because ‘Shaun of the Dead’ was released by Universal in the UK, and it’s now the third time in a row I haven’t used the real Universal fanfare at the start. So I thought I’d finally use it within the film!”

But there are also things like start-up tones— “Yeah, Mac and PC sounds, and BlackBerry sounds, and all manner of Nintendo and Sega sounds. I felt like these are like sounds that are so familiar to us, if you use technology, they can have this almost Pavlovian response. So there are things like using the Mac trash sound and the Mac error sound, it’s a literal soundtrack in [our lives]. But in a way, if you were working on the computer, you’re so used to those sounds, you don’t even register them anymore.” I sit upright like I’ve heard a whistle. “You sat up like, you did exactly…!” Wright says. “I feel like so much in our lives, you just walk around and in any coffee shop, or just in the street, the number of sounds that are happening, bleeps and motifs of different cell-phone rings, these kind of trillings, it’s like different kinds of bird sounds, but they’re so familiar to you, you don’t realize them anymore. Somebody’s iPhone is going off is like a sound that is in the air when you walk around the city. But I like this idea that Scott Pilgrim almost has own diagetic soundtrack going on in his brain, so when he does something wrong, he hears the Mac trash sound.”

It’s like Werner Herzog decrying the sounds of the jungle in “Burden of Dreams,” it’s Toronto as the urban jungle, and atop all the flora and fauna, “Scott Pilgrim” captures one young man’s soundtrack. “We could call this ‘BlackBerry Jungle.’ I made a pun! PUN.” Wright cackles.

Whatever anyone else tells you, puns are the highest level of humor, I offer. Michael Cera nods, says, “That’s what Hitchcock says.”