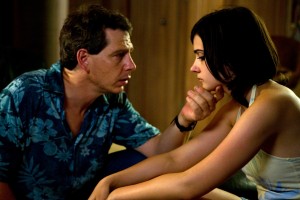 In that time, he edited an Australian film magazine, affording access to interview established filmmakers, but it also gave time to build on filmmaking relationships, to make several shorts and to define what “Animal Kingdom” really needed to be. What Michôd wanted, he tells me, is a movie that is grand, “but not grandiose.” The Cody clan is shepherded by Smurf, mother of Pope (Ben Mendelsohn, pictured), Craig (Sullivan Stapleton) and Darren (Luke Ford). Pope’s an armed robber in hiding, and Mendelsohn’s tactile performance as a loathsome, impulsive criminal is topped only by the brilliant Jacki Weaver as the sunny yet whole-heartedly, black-heartedly deranged Smurf, their mother, and grandmother to J. (James Frecheville), who is left in their care. J., who’s our eyes, slinks to corners of the frame, learns as every possible thing that could go wrong goes very, very wrong: the transformation of this gangly teen is as momentous as Michael Corleone’s.

Michôd’s broody work is assured dramatically and visually, but it’s his use of the soundtrack that first transfixes. “I proceed as if sound and music are one and the same. Because they are to me,” Michôd tells me. “I knew that I wanted to make a film, a crime film, that took itself very seriously and that had a constant sense of menace. For that reason, I wanted to have a score that had that certain darkness and melancholy, and an austerity as well, that would lend itself to that tension and menace. It was one of the reasons why I didn’t want to make a rock ‘n’ roll kind of crime film, that sort of heightened universe that crime films so often exist in these days. I felt that that would be counterproductive in my larger mission to create a film with a genuine underlying menace. Sam Petty, who did the sound design for the film, I’ve worked with a number of times before, and in some ways, I think nobody does that beautiful and poetic darkness and menace better than he does.”

Sometimes the heightening can come from subtraction. For instance, the house the extended family lives in seems to be very much damped. “Yeah, I think Sam was thinking about this quite a lot as well, but I knew I wanted that house, the nature of that house, it was in a location able to feel a little bit like a cave, or like a bunker, in which these kind of sweaty animals were lounging, in this maddening heat. I wanted there to be a certain stillness in there. But this is true of the film generally—a film in which those acts of violence explode out of nowhere, they’re gone before you realized what’s happened—it requires that there be a certain embrace of stillness and silence. I’m sure this is true of many sound designers, but I’m constantly amazed at the level of detail, the richness of detail in every single scene, that to many people, probably goes totally unnoticed, that is so profoundly contributing to the overall experience.”

“I have no idea,” he tells me when I ask when he first realized the power of sound and film. “I’m sure there’s some kind of psycho-physiological explanation for the way in which sound interacts with the brain. I started to realize this when—I mean, I still have this experience, when I go to introduce screenings, I’ll go in there, and all I’m ever worried about is the sound. I’m quite happy to go in there and see that the thing’s out of focus, or the print is terrible, so long as it sounds good. I die inside when I have to sit through the film and the sound isn’t working properly. Because there’s something deep, deep, I don’t know, people’s ears are [more] finely tuned to details than their eyes are.”

Robert Bresson is a director always concerned with sound. Images are finite, no matter how much you define them—refine the palette, it’s still concrete. Sound is our own brain soup. “Yeah. Yeah,” he agrees. “I wonder if I just love the sound and music part of the process because it’s right at the end of the process.” Michôd grins. “All the pain and suffering I’ve been through, it ends with that. The beauty and quiet of being in the world of sound and music, working closely with beautiful souls like Sam and Antony Partos, the composer, just elevating the thing and making it better, making it feel whole, making it feel complete.”

Andrew Niccol says he feels it would be wrong not to have an original score when you have a chance to put good music into the world. “It’s true. Luke Doolan, the editor and I, very heavily and very specifically temp-scored the film as we were cutting it. Music is such an integrally important part of the overall experience, I can’t imagine not cutting to music. But finding those pieces of music, anyway, that just happened to naturally, perfectly fit in the film, is a rare occurrence. One of the things I love about cinema in general, it’s that grand mash of all different art forms. Music’s a weird one that I really love but it’s also one where I find myself least capable of speaking the language, which is fascinating in itself. I find myself in the course of that speaking to a composer—in this instance, Antony—the way I would an actor or a production designer, break it down into talking about life and character and subtext but strangely having to wrangle a clumsy musical language at the same time, my clumsy musical language. Antony speaks it fluently. But I love it. I love feeling stretched.”