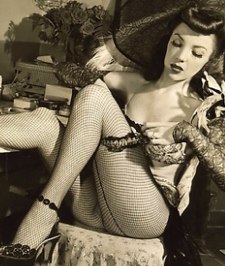 Leslie Zemeckis’ writing-directing debut as a documentarian, “Behind the Burly Q” dives headlong into the history of burlesque in the first half of the twentieth century, mingling archive footage and stories told by now-elderly ecdysiasts who revealed-concealed for a generation of surreptitious fantasists. Not the most well-organized of documentaries, “Burly Q” still revels in raunchy tale-telling for the ages, with great footage of colorful characters that will tickle the eyeballs of fans of the form. Among the interviewees is a tickled Alan Alda, who recollects the stories of his father, Robert Alda, who shared bills as a comedian with the doyennes of dishabille. The overall quality of the newly shot video footage is decidedly sub-par. Zemeckis’ husband, Robert, has an executive producer credit. With Renny and Dorothy von Muchow; John Perilli; Joan Arline, a stripper who performed with two white Russian wolfhounds and was an elder in her church; Lorraine Lee; Taffy O’Neil; Rachel Schteir, author of “Striptease”; Sunny Dare; White Fury, “who painted herself with buckets of paint and lit her tassels on fire”; Sean Rand, son of fan dancer Sally Rand; Chris Costello, daughter of Lou Costello; Tempest Storm, still stripping in her seventies, claiming affairs with JFK and Elvis; Blaze Starr; Kitty West; and Sherry Britton. 98m. (Ray Pride)

“Behind the Burly-Q” opens Friday at Siskel.