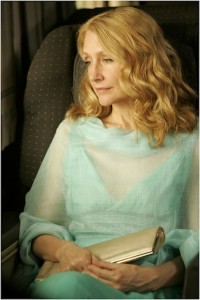 After a larger, lesser movie with similar themes but grandiose goals toward empty-calorie travelogue opened last week, Ryan Murphy’s “Eat Pray Love,” Ruba Nadda’s “Cairo Time” arrives, a sweet rebuke to the infinitesimal show of spirit in the Julia Roberts vehicle. After fourteen shorts and an earlier feature, the Syrian-Canadian writer-director has fashioned a story for the ever-splendid Patricia Clarkson, who, at the age of 50, sweeps away with her first leading role. Happily married fashion editor Juliette (Clarkson), vacationing in Cairo with her longtime husband, Mark, a U.N. official (Tom McCamus), must find another escort when work calls on him again and again. Mark’s trusted friend and former security advisor Tareq (Alexander Siddig) offers to show her his city, a city of history and of 17 million residents. Friendship, only friendship. East and West gain in translation. Juliette and Tareq suit each other. Juliette swans through the city. The movie moves gently on the currents of their budding friendship, looks, smiles, gazes. Is Platonic the ideal? Triangles, even impossible ones, are faultless movie material in the right hands. Nadda is deft. Clarkson is impeccable. The movie doesn’t strain for effect, for greatness. Perhaps just for calm, contentment, contemplation. For Clarkson’s compelling understatement. Hello, stranger. In a year of spectacularly apt and satisfying endings, “Cairo Time” may have the emblematic topper: blunt yet enigmatic, lovely, lasting, exquisite. It ties the past hour-and-a-half into an image, a motion, a duplicated discovery. Two into three. Cryptic? There you go. But not when you see “Cairo Time.” For international co-production reasons, Irish production house Samson Films, which made “Once,” became part of the team: perfect. “Cairo Time,” too, is sweet music. 88m. (Ray Pride)