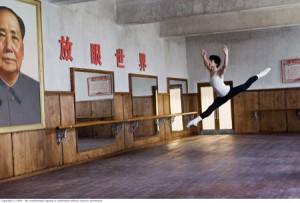 Australian director Bruce Beresford (“Driving Miss Daisy,” “Breaker Morant”) offers a bland biopic of Li Cunxin, a Chinese ballet dancer who defected to the U.S. in 1981. Currently residing in Melbourne, Li runs the Asian equities desk at Bell Potter Securities, Ltd., after retiring from the Australian Ballet in 2009. Australian screenwriter Jan Sardi, who earlier co-wrote “Shine” with Australian director Scott Hicks for a superior drama about Australian pianist David Helfgott, now adapts Li’s 2003 memoir “Mao’s Last Dancer” with laudable, if lackluster fidelity. Many lines of dialogue are taken straight from this uplifting bestseller about Li’s journey from a rural commune to the Beijing Dance Academy, to the Houston Ballet. In one of the chapters added for the book’s film tie-in edition, Li notes “the various movie offers I’d rejected from Hollywood studios” back in 1981. “But I did secretly hope that, like the book, a movie might perhaps give people new hope and courage in their lives.” Now Li performs at a podium rather than en pointe: this 2009 Australian Father of the Year delivers inspirational and motivational speeches at business gatherings. Beresford and Sardi do not heighten the drama of their source material. They limit their vision to Li’s modest self-image and self-expression. Neither the dancer nor the filmmakers spotlight an ideological agenda or an artistic saga. An interesting life in interesting times does not automatically make an interesting film. With Chi Cao, Chengwu Guo, Huang Wen Bin, Joan Chen, Wang Shuang Bao, Bruce Greenwood, Amanda Schull, Kyle MacLachlan, Camilla Vergotis, Jack Thompson. 117m. (Bill Stamets)