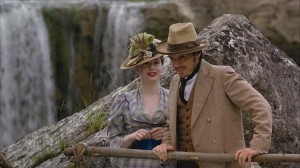 An English-language adaptation of an Anton Chekhov novella with British actors seems only at first breath an improbable project for Georgia-born Dover Koshashvili, whose economically shot 2001 Israel-set arranged-marriage comedy, “Late Marriage,” was such a sweet breath of modern cinematic observation. (And it brandishes one of the hotter sex scenes in memory.) Working from an adaptation by Mary Bing, however, Koshashvili proves a more-than-capable hand at Chekhov’s deadpan comedy of indolence with the chance and moment of tragedy ever at hand. In 1891, amid plushly appointed surroundings at the Black Sea, Russians gather, bicker, flirt and swan, fish and fuck. The conflicts are neatly defined and the dialogue nimble: the result is languorous, genial and sturdy. With Andrew Scott, Fiona Glascott, Tobias Menzies, Niall Buggy, Nicholas Rowe, Michelle Fairley, Simon Trinder, Debbie Chazen, Graham Turner, Jeremy Swift. 95m. (Ray Pride)

“The Duel” opens Friday at the Music Box.