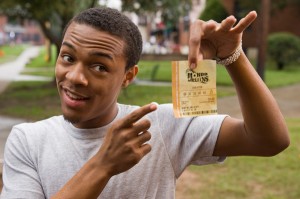 Erik White directs Abdul Williams’ script retailing the comic plight of Kevin (Bow Wow) after learning on a Friday that his winning lottery ticket will pay $370 million. If only he can hold onto it over the long Fourth of July weekend. Wealth-stealing is a more popular notion than wealth-sharing in Kevin’s community. As a clerk at a Foot Locker outlet, he’s one of the few characters with a job, besides the clerk at the corner store who sold him the ticket. Williams feels no duty to populate the housing project with role models. Kevin can tell if young women are morally worthy by whether they want him to use a condom. His male elders are only effective when they use physical force. That’s true of the bad guys and the good guy, a secretive basement shut-in with a taste for beef jerky and Cherry Coke. Cracks about the greedy preacher are tired, but a line about Jesus’ birth-certificate driver’s license is pretty funny. Set on a holiday with roots in “the pursuit of happiness,” “Lottery Ticket” is a pennypincher about investing any screen time to satirize African-American traditions of playing the numbers. The do-the-right-thing coda, whose art direction includes a Spelman College sweatshirt, is hard to buy. In an audio file of a press conference that Warner Bros. Publicity Department posted, the makers of “Lottery Ticket” sounded blindsided by a softball question about how they’d “give back” to the community if they had won all that money. Unlike Kevin, they found that inconceivable. With Brandon T. Jackson, Naturi Naughton, Keith David, Charlie Murphy, Gbenga Akinnagbe, Terry Crews, Loretta Devine, Ice Cube. 99m. (Bill Stamets)