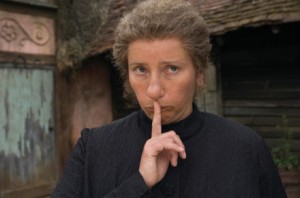 Five English kids get five lessons in manners from a nanny enhanced with a magic cane. By a peculiar logic, the bulky, snaggletoothed, hairy-moled Nanny McPhee (Emma Thompson) loses one of her unsightly features each time her charges acquire a new degree of civility and character. Thompson reprises her role from “Nanny McPhee” (2005). She also writes the screenplay based on Christianna Brand’s three books originally published in 1964, 1967 and 1974. In the first film, Mr. Cedric Brown was a widower with seven unruly offspring. Now Mrs. Isabel Green (Maggie Gyllenhaal) may learn she’s a widow upon opening a telegram concerning her husband who’s away at a war with no name. (An aircraft labeled “Enemy Plane” will drop a jumbo bomb in her barley field.) Susanna White directs this welcome exception to American fare for families. The charms are wholesome, even the messes of icky goo, from the muddy glop in the barnyard to rivulets of maple syrup in the shop where Isabel works. Snotty cousins Cyril and Celia arrive from London, precipitating the sorts of chaos that Nanny McPhee specializes in transforming into life lessons and fantastic adventures. Among the marvels springing from her cane are piglets swimming in synchrony. She also stages the aerial equivalent of crop circles by sculpting grain into ephemeral animal shapes by redirecting her jackdaw’s epic fart and belch, a consequence of its overpecking at explosive putty. Isabel’s eldest son (Asa Butterfield, “The Boy in the Striped Pajamas”) shows his own pluck by selling his piglets to pay for tractor repairs to harvest the barley to make a late mortgage payment on the farm his uncle is keen to sell to settle his gambling debt. Pediatricians may not endorse this nanny’s technique of instilling self-discipline by way of corporal self-punishment, but “Nanny McPhee Returns” spares the rod and rewards the goodhearted. With Rhys Ifans, Maggie Smith, Oscar Steer, Lil Woods, Eros Vlahos, Rosie Taylor-Ritson, Ewan McGregor and thirteen chaperones. 109m. (Bill Stamets)