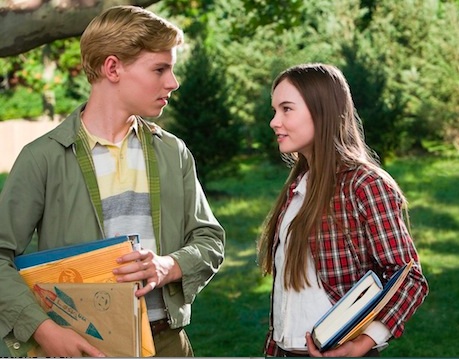 An extended piece in the Los Angeles Times in July on the movie’s marketing left me fearful. “I wanted the story to feel timeless and pure, in a time before texting and Facebook,” Reiner told a columnist. “I thought it was important to strip away the technology so we could get at the true emotions and feelings and make it as innocent as possible. I guess you could say I wanted to make it closer to my own childhood.”

In a small town in Michigan along Bonnie Meadow Lane in the six years leading up to 1963, in the season before the murder of JFK, lives a boy, Bryce Loski (Callan McAuliffe) and across the street, a girl, Juli Baker (Madeline Carroll). The values of their respective families resonate through their behavior toward each other, from Bryce’s stodgy, frustrated father (Anthony Edwards, who throws away the line, “I hate cool”) to Juli’s (Aidan Quinn), whose strength and compassion comes from unexpected places. McAuliffe is Cera-esque in the ways that people who don’t like Michael Cera describe that actor: a milquetoast for Juli to invest her substantial imagination in. You wonder what this wonderful girl sees in him: hope, potential, pretty eyes? She’s a smart child, tomboy with pigtails: Carroll has a feline cast to her eyes, a little of the young Anna Paquin to her features.

It’s “When Harry Met Sally,” in a way: the two junior-high not-lovebirds tell their respective stories from their own perspectives (the “flipping” of the title) in capacious voice-over, slightly precious, slightly precocious for their ages. They’re writers waiting to happen; instead of the six years it takes Sally and Harry to realize best friends do belong together, it’s six years resisting a first kiss. The story alternates between the children’s take on pivotal scenes; you could exaggerate and say the result is “The Wonder Years” meets Gus Van Sant’s “Elephant.” The overlapping perspectives are more story-driven than Van Sant’s visual lyricism, but affecting nonetheless. Coming from the 63-year-old director of 1986’s “Stand By Me” and his writing partner Andrew Scheinman, it’s almost as if “Flipped” were on their “fuck it list”: we’re going to make a movie we want to see, however unfashionable it may be, however dramatic its sudden turns from the tender to the terrible, however many pop songs we have to push onto the soundtrack to justify a $14 million budget. The color palette seems drawn from slightly faded, second-rate drugstore film processing, and the camerawork is restrained, but many gestures are edited with lovely rhythms. And there is a shot, an out-of-place extreme close-up of Juli starting to tear up, and the focus puller makes an instantaneous mistake before returning to focus and it’s wonderful, tender, a smack.

The conception of Juli Baker is of a female powerhouse in the making, a slightly nasal wonk, a Martha Stewart before Martha Stewart, and Carroll captures the character’s intelligence and determination without seeming brash or bossy. (“Who talked like that in junior high?” the screenplay nods to the audience.) There’s also a frisson of activism, from a director whose involvement in liberal causes extends to his recent role with the American Foundation for Equal Rights, which led opposition to California’s Prop. 8. (There’s even a throwaway line in a montage scene, “Republicans fought like crazy about the New Deal.”) The activism takes the form of Juli hoping to save a huge sycamore tree in which she climbs to the top to see the rural horizon in shifting light by day and dusk. (“You have to look at the whole landscape. A painting is more than the sum of its parts,” her father tells her.) Carroll even resembles the real-life Julia Butterfly Hill, who encamped in the embrace of a redwood tree for months to try to keep it from being logged. Her father’s painting of this “Avatar”-like “tree of souls” brings an unintentional but genuine smile. The rapport of Juli and her father is stirring: Aidan Quinn is splendid in every instant he’s on screen; he hasn’t had the chance to show what he can do with simple gesture and movement in a long time.

The depiction of how children are molded by their parents is done with sweet ease: reading the characterization of Bryce in the steps of his father (rather than his generous grandfather, measured with contented smiles by John Mahoney) suggests that the smart, delightful Juli would be writing this story not only from a remove of decades, but from years of having any idea of what had ever become of the snide, unworthy boy once he’d grown up. There are subtle suggestions even in the most sentimental turns and some surprising bits of subtext.

There are blips of anachronism in the dialogue, such as the word “stalker,” which should not have been allowed within 500 yards of the screenplay. Concerns about salmonella from homegrown chicken eggs seem out of time yet also comically prescient with the past week’s billion-ova recall. Yet. Eggs… trees… values passed along generations… the shock of two hands touching… The result may be upper-middlebrow to some tastes, but it’s also timeless, all-American, and an earnest, cordial first surprise for fall.