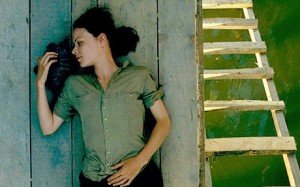 Adrift on atmosphere and sublime visual beauty, “Delta,” (2008) Kornél Mundruczó’s contemporary Hungarian fable about a brother, a sister and a house goes for the eyes and the gut. (The eyes win.) In a village along the Danube, a shaggy-bearded prodigal son (Félix Lajko)returns to his home village to find his lovely, grown sister (Orsolya Tóth) and mother working in a pub alongside her violent second husband. He’s inspired to build a dock and log house on an island that had belonged to his late father, and his sister joins him in the construction. Quiet moments lead to tragic circumstances: consider the ancient Greeks to have warned the pair. The story moves as implacably as a stream, sometimes maddeningly so. Magyar countryman Béla Tarr is listed as a script consultant in the opening credits; Terrence Malick’s nature-sensitive work needs no credit. Winner of the International Critics Prize at Cannes. With Lajkó , Lili Monori, Sándor Gáspár, Lajos Bertók, Mari Kiss. 92m. (Ray Pride)

“Delta” opens Friday at Facets. A trailer is below.