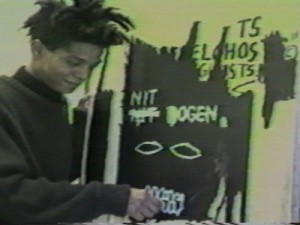 Tamra Davis’ ” Jean-Michel Basquiat: The Radiant Child” is that rare worthy hagiography, built on her friendship with the short-lived artist and footage which she shot in 1986, when he was only 25. Julian Schnabel’s impressionistic life of the artist, “Basquiat” has its own flair and myth-making pleasures. More than a bookend to that tribute, the glimpse of one artist at another in this documentary runs more in the vein of love letter and a window flung wide open to a moment in art in downtown Manhattan, a moment in the life of one artist who, alongside mentor Andy Warhol, was perhaps “famous for being famous,” but also more talented than many realized. Working with flash snapshots, memories from survivors of the time, appraisals from art-world powerhouses, as well as the central interview, pulled out of a drawer over twenty years later, Davis shows us a lost world: battered streets of Soho, littered streets, the World Trade Center tall and ordinary and unseen below those cobbled streets where 500 or so makers of art converged. “This is a high-quality film, right,” Basquiat jokes at the start. It’s a pungent snapshot of the time and how his “oblique pieces of poetry” turned into something larger, more grandiloquent, more deadly. The issues of race are aligned alongside those of fame, perhaps the most timeless of the themes bristling within. Davis’ other films include “Billy Madison” and “Half Baked.” 93m.  (Ray Pride)