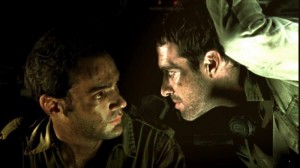 Writer-director Samuel Maoz served in the first Israel-Lebanon war in June 1982, and like his countryman Ari Folman with his “animated documentary,” “Waltz with Bashir,” he draws from his own experience of the time for “Lebanon,” his superbly drawn portrait of young men in war, and the claustrophobia of battle in tank warfare. (They’re trapped in what could look to be the safest place in battle, but think “Das Coop.”) Middle-aged artists are still haunted by events of their youth. The compression of memory almost three decades along is lapidary. It’s “The Hurt Locker” compressed to one long, lasting ache. Once the four inexperienced soldiers come under fire in a small village where they are unwelcome, the world is largely seen through gunsights, a frame, a small, privileged frame that suggests everything within its range is a story, and the story is filled with antagonists, attackers, enemies. Everyone, every thing is in the crosshairs. There is no overview, no God’s-eye perspective, no strategies of the higher-ups, the generals, the politicians. A single day in their life could be the single day of their death. Every sound—and the sound design is immaculate, nightmarish—is alive. Maoz wants to convey visceral sensation and palpable fear. He succeeds. This is cinema of sensation, the moments of war without glory, only mortal fear. With Oshri Cohen, Michael Moshonov, Zohar Shtrauss, Reymond Amsalem, Itay Tiran, Yoav Donat, Dudu Tassa. 94m. (Ray Pride)

“Lebanon” opens Friday at the Music Box. A trailer is below.