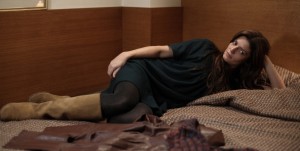 (Non ma fille, tu n’iras pas danser, 2009) At the hurting center of Christophe Honoré’s dysfunctional family story, “Making Plans for Léna,” is the radiant Chiara Mastroianni, born of Catherine Deneuve and Marcello Mastroianni, handsome axioms of the European art cinema of the 1960s and 1970s. (It’s startling how much she can resemble both her parents, in different ways, from different perspectives.) Preparations for a trip to visit her family for summer holiday in the countryside go awry for this single mother and Honoré pitches her into a story resembling Arnaud Desplechin’s superior “A Christmas Tale.” In lesser hands, the succession of sketches of the random trials of tense, unnerved Léna would remain wan, but Mastroianni transforms her unlikable character into a figure of fascination. Honoré’s camera embraces her, surrounds her with landscapes and figures in landscapes that express Léna’s disarray. As in his earlier movies, like 2004’s “Ma mère,” Honoré is more a teller of mood than of tales. With Marina Fois, Marie-Christine Barrault, Jean-Marc Barr, Louis Garrel. 105m. (Ray Pride)

“Making Plans for Lena” opens Friday at the Music Box. A trailer is below.