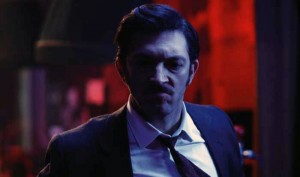 “Nobody kills me until I say so!” There’s a gangster’s declaration for you, the tagline from the fictionalization of the life and exploits of French crime kingpin Jacques Mesrine. Told in two parts, drawn from a memoir, both directed by Jean-François Richet (“Assault on Precinct 13,” 2005), “Mesrine” takes the shape of a sleekly fitted suit for a plumped-up Vincent Cassel more than a fully-fashioned crime epic. But the movie doesn’t aim for “Godfather”-style complexity or Olivier Assayas-style impressionism (as in the forthcoming five-hour “Carlos”), but rather for a rapid-fire action bauble built on scenes of Mesrine’s rise, then ending abruptly in anticipation of the second film (due for release next Friday). Don’t expect the astringent experiments of a movie like Michael Mann’s “Public Enemies” or the code-of-honor classics of Jean-Pierre Melville (“Le Samourai,” “Le Cercle Rouge”): it’s just a rapid-fire bit of brute pop gangsterism with chewy star turns (aside from the magnetic Cassel, there’s a nice cameo from Gérard Depardieu as a mentor to Mesrine). The latest foreign-language release from adventurous Music Box Films, “Mesrine” likely won’t be the success that “Tell No One” and the Millennium Trilogy (“The Girl With The Dragon Tattoo,” “The Girl Who Played With Fire” and autumn’s “The Girl Who Kicked The Hornet’s Nest”) have been fiscally, but if anyone is going to get mileage out of kicky big-screen foreign-language fare in the U. S. market, it’s that Chicago-based distributor. With Ludivine Sagnier, Cécile de France. 113m. (Ray Pride)

“Mesrine: Killer Instinct” opens Friday at Landmark Century. The second feature opens next Friday. The trailer is below.