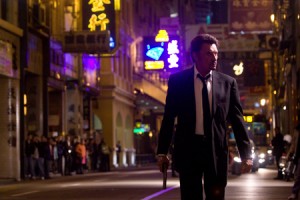 (Fuk sau, 2009)  Hong Kong action auteur Johnnie To’s “Vengeance” finds Melville-style bursts of creative inspiration in a story that casts French superstar Johnny Hallyday as the criminal vengeur. Where Sylvester Stallone’s approach to action filmmaking in the twenty-first century is piling on with the violent elephantiasis of the setpieces of “The Expendables,” To’s approach is to take the possibilities of the frame, fracturing and reassembling them through inventive, vigorous editing, and taking the entire idea of genre and the artistic possibilities of moviemaking very, very seriously. Very seriously, especially when the subject is action. Logic comes not from plot or strenuous attempts at plausibility, but from kinetic choreography. Action is character. Motion is wit. The cartoonish is the everyday. And Hallyday’s a perfect raincoat man for his age, as Alain Delon, young and beautiful, was in Melville’s “Le Samourai.” Hallyday’s character is a French restaurateur who comes east when Triad gangsters shoot his daughter (Sylvie Testud) and kill her family. He’s named Costello, just like “Le Samourai”‘s Jef Costello; Hallyday was a last-minute replacement for… Alain Delon. With deep-set small eyes and a deeply lined face, Hallyday’s haunted from frame one, almost a reincarnation of the smaller, bulkier Charles Bronson, and once he’s on the streets of Hong Kong, and later, the more exotic streets of Macau, the former Portuguese colony, he’s all business, whether hiring a team of hitmen (the charming Anthony Wong, Lam Ka Tung and Lam Suet) or wielding a weapon himself. There’s some plodding plotting as well as the use of Polaroid pictures that evokes “Memento,” but it’s not worth the remembering: the bold moviemaking in bright, bold colors sears the mind instead. 110m. (Ray Pride)

“Vengeance” plays at Siskel Saturday, Monday and Wednesday. The Hong Kong trailer is below.