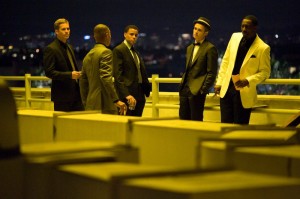 “Takers” is reportedly the largest-budgeted production ever from Sony’s Screen Gems division, at $32 million, and several action setpieces show where much of that money must have gone. Alternating between sun-streaked Los Angeles streets and glam, glum-lit club spaces, director John Luessenhop’s bitter, cynical cops-vs.-robbers-vs.-robbers-vs.-Russians über-mastermind heist movie resembles nothing so much as a late 1990s Hong Kong action entry. Luessenhop is sufficiently fond of the city to show street signs in each major scene, including full-on close-ups in one instance. The Hill Street setting of the story’s big caper evokes “Heat” (and “Inception,” shot after this film) but also the thriving exteriors of Kowloon in movies by John Woo and others in the last century. Luessenhop is fond of jerky camera motion that works against spatial sense, depriving some of the pleasures that extended location work should offer. And, in the increasingly operatic shootout in the film’s third act, the soundtrack is reduced to music and thudding sounds as gangsters systematically shoot up several hotel rooms and a corridor. His fondness for certain layered compositions and nocturnal light sources resemble the artfully artsy cinematography of Mark Pellington’s films (such as the Screen Gems-released “The Mothman Prophecies”). Slow motion, the flurry of feathers as if from Woo’s own doves, men taking one for other men, all from the HK playbook, but the sound design in that extended scene may be the most stylish thing in a movie populated by characters who dress like extras in late-night cable ads for an expensive new liquor positioned for hard-partying twentysomething money-spenders. The preview audience seemed most appreciative of racial conflict; catcalls and cheers greeted the murder of a policeman. It’s not Walter Hill, but it’s a slick sensory swim. The ending hedges some bets, but its ice-cold immorality is blunt and refreshing, at least until huge whoops rose as the credits rolled. With Idris Elba, Matt Dillon, Paul Walker, Hayden Christensen, Chris Brown, Michael Ealy, Steve Harris, Jay Hernandez, Marianne Jean-Baptiste (“Secrets & Lies”) and Zoe Saldana in a brief fragrant flurry of close-ups. Poor digital projection at the screening I caught made certain scenes look subpar; the 35mm version is likely more pleasing to the eye. 107m. Widescreen. (Ray Pride)