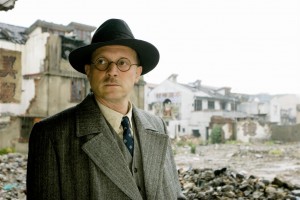 Writer-director Florian Gallenberger’s earnest, self-important “John Rabe” won four 2009 Lola Awards at the German Film Awards, for best film, lead actor, art direction and costume design. An indifferently mounted historical epic, “Rabe” tells the story of the “Schindler of China,” (Ulrich Tukur, “The White Ribbon”) as some have dubbed him, a German Nazi businessman who saves the lives of 200,000 Chinese during the 1937 “Rape of Nanking” but who died after the war in disgrace. Battle scenes are kept to a minimum, and the stately pace suggests both sincerity and a deep devotion to the idea of film awards. Narration drawn from Rabe’s diaries demonstrates the man’s methodical, dislikeable mind. A romantic subplot burns screen time and flashes of full-frontal nudity distract. However worthy, the life of John Rabe does not produce another “Schindler’s List.” With Daniel Brühl, Dagmar Manzel, Anne Consigny, Zhang Jingchu, Teruyuki Kagawa and a seriously out-of-place Steve Buscemi as an American doctor. 130m. (Ray Pride)