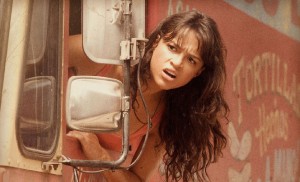 What on earth is “Machete”? More properly, what in Texas is it? Originally one of the fake coming attractions that was part of the “Grindhouse” package—”You fucked with the wrong Mexican”—Robert Rodriguez’s expansion of his pungent “Mexploitation” joke to feature length is, surprisingly, an urgent political polemic that still pays tribute to violent and sexual eyeball kicks. In this way, it’s probably the first full-on pastiche of Roger Corman’s subversive play at his 1970s New World Pictures label that anyone’s ever assembled. “Corman was able through New World to launch the careers of numerous now famous directors like Jonathan Demme, John Sayles, and Joe Dante,” Gary Morris wrote in Bright Lights Film Journal in 2000. “Most intriguing was the company’s bizarre melding of feminist politics, anticapitalist rhetoric and parody with quasi-soft-core sexploitation.” Substitute “anti-anti-immigration rhetoric” in that sentence and you get the savor of the writer-director’s satirical queso con queso. A few shots at the beginning are “scratched” to suggest an old, beaten-up film print, but Rodriguez quickly turns to something less wistful. Danny Trejo plays the myth-scaled Machete, a former Federale who’s on the streets after a confrontation with a paunchy, raspy-voiced drug lord (Steven Seagal). Machete’s hired to assassinate a state senator (Robert DeNiro) who wields his own gun in hunts for border-crossers. Much complication ensues, with scenes that seem inspired by both “The Parallax View” and “Fast Food Nation.” The cast includes Jessica Alba as a mothering customs agent; Cheech Marin as Machete’s priest brother; Lindsay Lohan as an heiress whose role includes both nudity and a nun’s habit; and Michelle Rodriguez as the owner of a taco truck—”Tacos de Luz”—who spins legends to encourage revolution. Let’s just say Robert Rodriguez appreciates her beauty, equipoise and simple screen charisma and takes pains to enshrine it. “Machete” is topical, local, lurid, relentless, bitter, bloody, angry and blackly funny. It’ll be fascinating to see what kind of audience it will draw. Among the memorable credits, which include a mere six technical nods for the usually credit-happy Rodriguez: “Introducing Don Johnson.” (Amusingly, the extensive profanity in Spanish is not fully subtitled.) 105m. (Ray Pride)