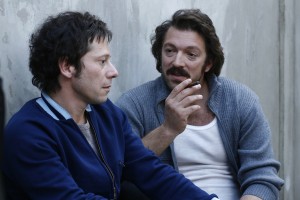 Freed from establishing the background of the French gangster in “Mesrine: Killer Instinct,” director Jean-François Richet (“Assault on Precinct 13,” 2005) is able to leap into courtroom escape and prison-break setpieces for their own explosive pop movie virtues in the second film, “Mesrine: Public Enemy # 1.” The joy that crosses Vincent Cassel’s plumped-up face as he challenges authority, whether bankers at work or judges in their courtroom, is splendid to observe, less a matter of capturing the gangster’s shameless exploits than as a demonstration of actorly verve. You’re conscious of the seductive Cassel as a fine showboat more than him being able to embody the urges of Mesrine as he revels in his newfound notoriety as France’s most wanted crook. Despite all the wigs and mustaches in the world, Mesrine, or Cassel, is always standing out in a crowd. Mathieu Amalric (an Arnaud Desplechin regular) is wry as a criminal accomplice and Olivier Gourmet a cocky cartoon of a police adversary. The reported $80 million budget for the two films again provides for a rich eyeful of 1970s period details. 130m. Widescreen. A review of “Mesrine: Killer Instinct” is here. (Ray Pride)