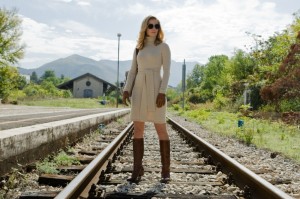 International hitmen are over-represented in the database of screen characters’ careers. George Clooney is kept employed playing all manner of worldly operatives—though he only fired workers, not weapons in “Up in the Air”—who never get the girl. We feel so bad for the guy who can’t make his deadly living work out for his love life. Anton Corbijn (“Control”) directs Euro-existential thriller “The American” with stylish understatement. Rowan Joffe adapts Martin Booth’s 1990 novel “A Very Private Gentleman,” which was apparently about a specialist who hand-tooled firearms for assassins, but here the title character is also a hands-on trigger man. The familiar plot targets a professional killer with a professional courtesy: it’s his turn to take a hit for our entertainment. From the first scene, Jack (Clooney) is on the run from “the Swedes.” His contact in Rome directs him to a mountain village where he poses as a magazine photographer shooting landscapes and architecture, not people. There he starts assembling a gun for another assassin, falls for a local prostitute and talks about God and guilt with a local priest who notices le Americano has the hands of a craftsman, not an artist. Jack is so nervous about whomever is out to shoot him, he might shoot anyone he gets close to. Two lovers will notice clues, underfoot, of what they figure are “hunters”—once on a frozen lake, another in a running stream—and Jack must decide to shoot her or not. Ever vigilant about his environment, the stoic pro spots an endangered butterfly, but is not cognizant of a bullet he takes. The cinematography is by Martin Ruhe, who provided the black-and-white of “Control” and the green-and-grime of “Harry Brown.” With Violante Placido, Thekla Reuten, Paolo Bonacelli, Johan Leysen. 105m. Anamorphic 2.40 widescreen. (Bill Stamets)