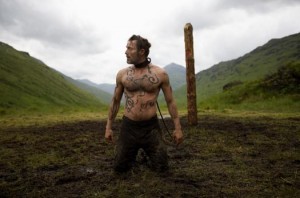 The barbarians are coming. From Neil Marshall’s upcoming “Centurion” to Kevin Macdonald’s “The Eagle of the Ninth,” the glories of tactical slaughter are being celebrated by filmmakers across Europe. In this case, it’s Nicolas Winding Refn, the Danish scholar of brutalism (“Bronson,” the “Pusher” trilogy) going full force in the opening passages of “Valhalla Rising” to convince us of a hostile, hallucinatory Viking-populated world of centuries ago. There are echoes of Tarkovsky and Malick in the consistently stunning cinematography, establishing a portentous, mystical tone, and Mads Mikkelsen (“Pusher,” “Casino Royale”) gives his all playing a mute slave known as One-Eye. Still, Refn doesn’t sustain his momentum; the pace is slow, the violence grueling. The opening twenty minutes or so are stellar, and the Scottish locations hold the eye on an extended journey that the Christian Vikings believe is to the Holy Land. As one character observes across the Highlands, “That’s not a curse, it’s just a mist.” And that’s not the sound of the past, that’s just heavy metal. With Gary Lewis, Jamie Sives, Ewan Stewart, Alexander Morton, Callum Mitchell. 100m. 35mm. (Ray Pride)