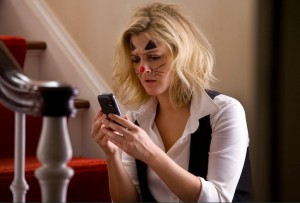 Nanette Burstein ups the average with confident glee in the zippy romantic comedy “Going the Distance.” In the New York-set feature debut of the director of “American Teen,” Drew Barrymore is Erin, a would-be journalist six weeks away from moving to San Francisco, where her sister (Christina Applegate) and possibly more jobs await. She lays it out: “I’m 31, I’m an intern, I’m gonna get wasted.” Drinking in a local bar that night, trying to beat her own high score at Centipede, Garrett (Justin Long), who works at a record label, intrudes on a dare from his friends (Jason Sudeikis, Charlie Day), leading to Erin’s explosion: “Fucker put his face in front of the game! Who does that?” But friendship, flirtation, more, develop. Tick-tick-tock…

A few setpieces don’t work (the dinner-table scene in the ubiquitous trailers; a tanning-bed bit; a Hitler mustache) but overall, it’s a fresh-voiced, song-laden, banter-filled, foul-mouthed throwback to 1990s-type New Line Cinema comedies. (Screenwriter Geoff LaTulippe worked at the label when he sold the original script.) Observations about best-friendship between men and women, the flailing of journalism and the music industry and protracted adolescence are couched in plentiful jokes. Plus, Barrymore and Long actually seem to like each other, a rare enough feature in latter-day rom-coms. It’s a lollipop with smoky bacon bits inside, a compendium of verbal curveballs.

New York City locations are plentiful, including almost a dozen bars and restaurants, including The Half King, whose owners include Burstein and writer Sebastian Junger. “We did a lot of improvisation,” Burstein tells me. “We even did a guerrilla, documentary-style section, you know—when they fall in love? We just shot with a couple of hi-def cameras and almost no crew. Just went to locations like Coney Island and Chinatown where we didn’t have to light. And because they are a real couple, they could just sort of be themselves!” She laughs. Their chemistry and the settings improve on the average getting-to-know-you montage. “It was a real experiment, because we had other scenes that were going to take their place, but I never felt they were that strong. This was like, okay, we can do this for very little money, and the studio was like, ‘Yeah, go for it.'”

Burstein’s “American Teen” tickled some quibblers’ antennae for its stylistic vocabulary that drew equally from fiction and nonfiction, but this was different. “On a fiction film, you have so many decisions you have to make. Whereas, in a documentary, you don’t have to, everything that appears in front of the frame is not a decision that you’ve made. It’s more about story and your point of view and your character. In a fiction film, you have to think about everything that you’re creating. So, I appreciated that, actually. That level of control.”

LaTulippe’s script had been highly regarded in Hollywood, but the characters were crueler than what Burstein’s put on screen. “There are things that I loved about the script. I loved the situation that they were in. (But) I think you had to be really invested to fall in love with these characters. We rewrote it a lot in that direction, (but) keeping the irreverent, raunchy R-rated.” The guys have some tart talk, but the women get some eye-opening jokes as well, especially between Barrymore and Applegate. “M-hm,” Burstein says, smiling. “This is how girls talk! You know! It’s fun and you never see that in movies, and when you see it, it’s how guys imagine girls talk. It’s often really not authentic or it starts to feel inappropriate. So, we, we went for it.”

Did anyone count how many variations on “fuck” are in the movie? “We did! We counted. Then I had an editing intern count the number of F-words in some of the Apatow movies to see.” Burstein laughs. “I was just curious. We did not exceed ‘Knocked Up’ or ‘Superbad’—we’re less, but there are quite a few F-words.”

There’s a thirtysomething for the twenty-first-century kind of thesis under the like and love and laughs, but they don’t have the fancy jobs and the starter homes like in the 1990s. “No, they don’t have kids and they’re not even really quite thinking about that yet. Yeah, I think this is today’s world. You’re in your late twenties, your early thirties, and you’re still trying to navigate your career prospects and your love life and it’s hard. It’s tough. Nowadays it’s hard to get a job; who knows where you’re going to live…” It takes a while, but the movie doesn’t portray a romanticized Manhattan sandbox, it turns realistic about their career choices. Burstein laughs. “These are two doomed fields! It’s not a glamorous thing anymore, it used to be cool and glamorous. It was a downturn for those industries even before the national downturn, so it was always very conscious to highlight why it was difficult for them to live in the same city. They both have passions for careers that are really having a tough time.”