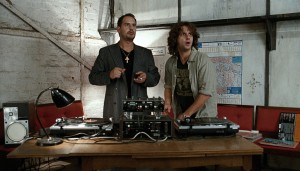 German director Fatih Akin is known for narratives with patterning of chance and cruel fate, like the fierce “Head-On” and the tragic doublings of “The Edge of Heaven.”

But music is always the heartbeat of his work, from his 1998 debut, “Short Sharp Shock” to the music-drenched documentary “Crossing the Bridge: The Sound Of Istanbul.” Part of the narcotic quality of “Head-On”‘s obsessive love story comes from the use of pop. Akin’s also a very good deejay; at the after-party for his latest, the sweetly farcical “Soul Kitchen” which opened the Thessaloniki International Film Festival last November, he spun until dawn, musically, physically, jumping wildly to his work.

There’s nothing tragic about “Soul Kitchen,” with food, sex and the gentrification of a section of Akin’s hometown of Hamburg providing loopy complication after loopy complication, driven by his song selections. Like the slogan of the late, lamented Chicago restaurant that was called Soul Kitchen, there’s loud food and spicy music throughout. Akin describing the plot, which involves turning a greasy spoon into a tasty taverna, as a mix of “Rocky,” kung fu movies, American musicals and years of experience in his beloved hometown of Hamburg, could take up this space and more. It’s good, it’s giddy, it’s the cosmopolitan equivalent of a big happy dog ready to play.

In fact, Akin says, music is both architecture and pulse when he makes movies. “In the past, when I was shooting something, and editing, we would put music underneath it and it really worked. I was falling in love with the music,” he tells me. “But then later on the music was too expensive, you see. Or the composer’s estate didn’t allow us to use it. And this was always very frustrating. It’s like you fall in love and then the girl doesn’t want to date you, something like that. I swore before I did ‘Head-On,’ this time I will have all the music before. I collected all the tracks that I would use for the film. We asked, how much will they cost and we put it in the budget. That’s how we did it. I think 80 percent of the music we had it in our minds and asked for how much they cost before we use in the film. And, since then, I’ve worked like that. Same with ‘Soul Kitchen.'”

And it’s a way to avoid potential heartbreak in the editing room when you have other things to think about. “Yes. The best thing about this is when you know which music you will use in each scene. So you can put all your songs on a CD or two, and you can listen to these CDs. So what you have then is a chronological, emotional map of the film. You see? You can hear where the rhythm of the film will break down or where it doesn’t make sense. And you can open the script again and read the scene where the music doesn’t fit. Sometimes you see, we don’t need this scene, we can throw this scene out. It works better with it. It helps a lot for screenwriting and structuring the film.”

And the many moods of the music express the different moods of all the characters. “Yes, exactly. Exactly. Like I said, it really is a map. I know that Sergio Leone worked that way, that Ennio Morricone was producing and recording the music before they were shooting.”

Akin still seeks out fresh sounds. “I listen a lot to music on the Internet; Internet radio is an interesting source. Especially with jazz. You have so many jazz channels, broadcasting companies from Chicago, all over the States, all over the world. I’m collecting vinyl still. Vinyl is very important for me! I’m a collector with these things. I bought my first vinyl when I was like 10 years old. It’s my last sin, to spend money for vinyl, I don’t smoke anymore: I quit smoking cigarettes, I quit smoking weed. I don’t have any sins anymore! So I spend money on vinyl.”

Small music labels, jazz and electronic and indie rock, are doing well for themselves doing vinyl now. “When we do the soundtrack negotiations with the labels, record labels come, ask if we want to have a soundtrack, we have something in our contract: They have to press vinyl. The first time we did it was for ‘Crossing the Bridge.’ We were forcing them to use vinyl! When we had Universal for ‘Soul Kitchen,’ we’re like, ‘Okay, guys, it’s vinyl, or you don’t get the contract.’ And they did, they pressed I think 10,000 vinyls. It’s a double album. I’m very proud about that. That’s the best thing about the filmmaking! I mean, one day I’m gone, but the vinyl will outlive me.”