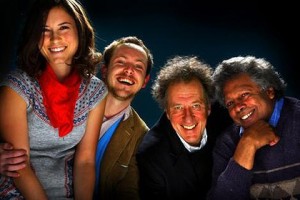 An adaptation of a 1990s Australian stage musical, “Bran Nue Dae” is a corny road movie about young lovers on the run, with an aboriginal cast, set in 1969. Rachel Perkins directs with bright colors and a peppy pace, suggesting an “Up With People” from Down Under. There’s singing from start to finish, but sadly, little movement toward any kind of dancing. The country-ish songs are forgettable. I can’t vouch for the cultural authenticity, but the occasional lyric like “There’s nothing I’d rather be than an Aborigine” rises to the top. Geoffrey Rush is enjoyably over-the-top as a priest in pursuit of a runaway student. The oft-gorgeous cinematography is by Andrew Lesnie (“Babe,” “Lord of the Rings”). With Rocky McKenzie, Jessica Mauboy, Ernie Dingo, Magda Szubanski, Deborah Mailman, Tom Budge, Ningali Lawford, Dan Sultan, ‘Missy’ Higgins. 88m. (Ray Pride)

“Bran Nue Dae” opens Friday at Pipers and Showcase Icon. A trailer is below.