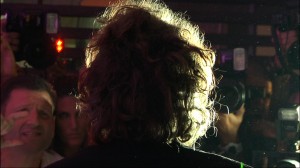 As a first-time screenwriter and producer, if you choose to trust the end credits of “I’m Still Here,” actor Joaquin Phoenix (“Walk the Line”) has cast himself “as himself.” Actor and first-time director Casey Affleck (“The Assassination of Jesse James by the Coward Robert Ford”), co-credited as screenwriter and producer, likewise appears here “as himself” directing a documentary-style profile of an actor who stops acting to start rapping. The teaserly title of this folly of conceits serves as a disclaimer that Phoenix is indeed still acting. And Affleck is likely the co-cinematographer and co-editor, as the credits state. He appeared in “Gerry” (2002) where he also got writing and editing credits. “I don’t want to play the character of Joaquin Phoenix,” says Joaquin Phoenix, while wearing a sports jersey for the Defiance Bulldogs. He announces his retirement from acting, grows a beard, gets fat, tapes his broken sunglasses, abuses his assistants, raps badly and acts like a talentless asshole all at the same time. No one involved acts as if they have anything of interest to say about documentary or celebrity or self-parody. For a better reveal during the end credits, check out Michelle Citron’s doc-deconstructive “Daughter Rite” (1980). With Antony Langdon, P Diddy Combs, David Letterman, Ben Stiller and lots of others who may or may not have signed releases. 108m. (Bill Stamets)