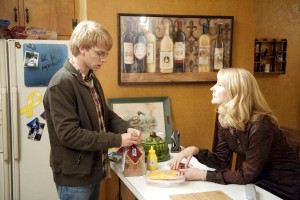 Poop happens. In “Legendary,” an Oklahoma-set bullying/high-school wrestling tale, produced by wrestling conglomerate WWE Entertainment, veteran television director Mel Damski works the uplift. An opening voiceover by Danny Glover about Sooner exceptionalism accents his sibilant sonorousness, and the overemphasis sets the tone for the rest of the movie: It’s Karo syrup coming at you in gusts and quarts. (Glover is the wise older man who offers up knowledge down by the river.) A bullied, fishbelly-white teen milquetoast (Devon Graye) honors the memory of his long-dead father, a local wrestling legend, by becoming a pin-down prodigy. I’ve never witnessed terrible acting by Patricia Clarkson before; here, she’s less phoning it in than texting an SOS to her agent. Pitting wrestler John Cena against her skills, even with her barking performance, is cruelty beyond the call. Message: it’s no “Rudy.” 107m. (Ray Pride)

“Legendary” opens Friday at the Chatham and the Wilmette.